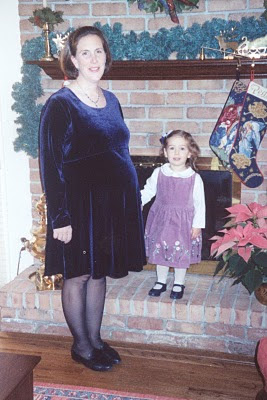 
Some recent events have brought Sam to mind lately, and I have been missing him and grieving. A partner at the law firm where I work was killed in a car accident over the weekend. He was 49 and left a wife and two kids under 10. Earlier this Summer a friend when I was in college died of cancer after a long battle, also leaving two kids under 10 and a husband. A friend is also 8 months pregnant with her second child. She has a lovely daughter who is 5 and who is terrific! Emma and she get along really well, and Emma loves playing big sister to her. Babies usually make me think of Sam, but I think it's the combination of the two deaths and also the fact that Emma is away from home at sleep-over camp for 4 weeks. I am always more contemplative when Emma's away -- it just reminds me that she's growing up so fast and that time is precious. The house is empty of kids and I just can't help thinking about what it might be like if Sam was still with us. He would be 8 and about to start 3rd grade at Primrose Hill Elementary. Our lives would be so very different.

We had a grief counselor visit at work on Monday. He spoke briefly at the staff meeting we had upon hearing about the death of our co-worker. I thought that I would probably have heard everything he had to say already because I experienced the death of a close c0-worker in October 2002. She died in her early 30s after being sick with cancer for just 3 weeks or so. We had a grief counselor speak then. Maybe the guy on Monday had the same things to say, but I was just ready to hear them in a new way. After all in October 2002 the loss of Sam was only 8 months old. Anyway, this counselor spoke about the phases of grief and how eventually we will visit with our grief and that these visits will be less and less frequent. We won't necessarily know when the visits are going to happen. I have found this to be very true. Part of me thinks it's odd to be still visiting with it now, 8 years later, but the good cry I had yesterday was extremely cathartic and I should probably let those feelings out more often. After all the counselor also said that we never get over a loss, we just integrate it into our lives and move on.

Please don't misunderstand me here. I love my husband and my daughter Emma, my friends and family. I love and appreciate them all and I know that I have a great life, but that doesn't lessen my yearning for my son who cannot be with us on this earth. There, I said it. It's very hard for me to say that "out loud"

For anyone reading this who does not know who Sam is. He is my son who was stillborn on February 14, 2002 at 38 weeks, just a week before my C-section was scheduled.

I have thought about your loss many times over the years. Sam would have been the same age as my girls and Annabelle in our "supper club family." You are in my prayers as you continue to the long journey of mourning for your son. I am glad that you are able to talk about it and finally put into words what has always been in your heart. I love you and I miss you!
-Amy Hancock
7/28/2010 4:19 PM

Anonymous said…
Beth, You are so right about not getting "over" grief, just learning to live with it. I still miss my mother (completely different than your loss, of course)--it does not hurt as badly as it once did, except sometimes on holidays or, like you, when there is another death to remind me of the whole process. Don't be afraid to express any feelings you have--everyone grieves differently and there is no right or wrong. Thanks for sharing this.
Sharon
7/28/2010 6:40 PM