Just another {Holiday} weekend at the Holmes House 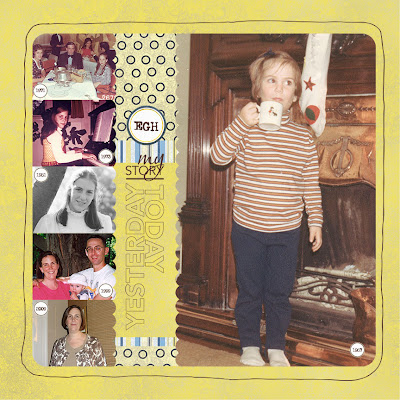 Things have been pretty busy around here. My mother-in-law Brenda just returned home to Florida this morning after spending a week with us. Emma turned 10 last Wednesday and we all had today off for Columbus Day.

I have been taking an online course in scrapbooking called Yesterday & Today by Ali Edwards and Big Picture Scrapbooking. This week was week 2 and we learned about scanning older photos to use in our scrapbooks. The task this week was to create a title page for the album we will be creating in the class. I spent this morning scanning some photos from an album my Mom gave me and some from old scrapbooks of mine from school and college, as well as some photos from the more recent pre-digital days. I then created my intro page using the photos and the template and word art that Ali Edwards created for the class. Here's how it turned out. I'm pretty happy about it. The paper choices are all mine as are the photos and the dates on the photos. It was fun reminiscing about the periods of the photos!

On Saturday we (Jim, Emma, me and Brenda (my mother-in-law) all headed out for the day. First we hit the American Girl Doll Store in Natick , Ma outside Boston. This was a birthday trip for Emma so she could spent some of her birthday money. We started out with brunch in the Bistro at the store. Emma brought her doll (all the girls do) and there was a special seat for the doll who also got her own mini-muffin. The brunch was actually really good and we had a window seat with a great view of the hills and the trees starting to change colors. After eating it was time to shop. Emma had a hard time deciding how to spend her money, but ended up getting another doll (her second). She choose Molly who is a historical character girl from 1944. She also had enough money to buy the Chrissa movie. Chrissa is this years American Girl Doll of the year and the movie is all about a 4th grader who moves and changes schools and is being bullied. While it's a bit heavy handed (for an adult -- Emma didn't seem to notice) it was a good movie with a good message. I am sad to say that Emma had a similar, though not as bad, problem with a group of girls her first year here in Barrington -- in second grade! 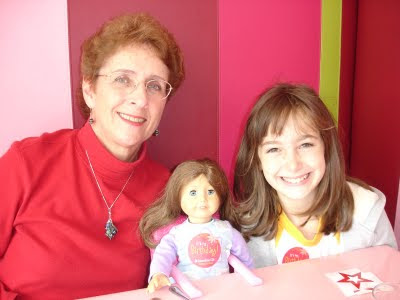 In the photo below you can see all the "loaner" dolls that are available for girls to eat in the bistro with if they don't already have there own. The store itself is brilliantly merchandised. It's worth a trip just to look at the displays showing all the dolls and their clothes and accessories, and for the historical dolls -- information about the time period they lived in. I found myself wanting to buy a doll for myself -- I am partial to Rebecca Rubin from 1914. I must say it makes me feel a bit old that there is a historical doll from 1974 (that doll is from my time period!). 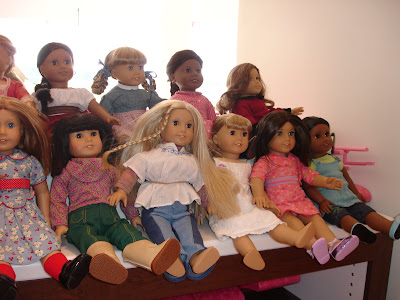 After the American Girl Doll Store we headed off to Cambridge to tour the Longfellow House. We wound our way there past some of our old haunts from when we lived in Belmont -- including our old house. We never got to tour the Longfellow House when we lived there because it was closed for renovation. It's run by the National Park Service and the tour was terrific. The guide was really great really knew her stuff. I would recommend a visit! I may even have to read some Longfellow poems now. Jim is a huge fan of Longfellow and this is a place he's wanted to go for a long time. 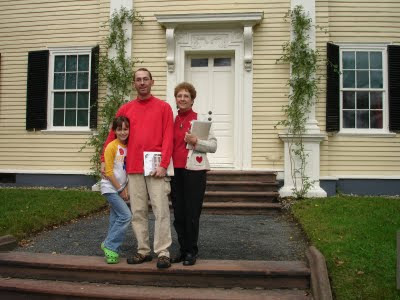 Here are Emma, Jim and Brenda outside Longfellow's House on Brattle St. in Cambridge, Mass.

Next up was a trip into Harvard Square which was really busy with lots of people mulling around. It must have been parents weekend somewhere since there were lots of multigenerational groups. We looked around at the Coop Book Store and got some Harvard clothing (Emma wants to live in her flannel lounge pants she bought!). We also went in the Curious George Book store where Emma bought another cookbook -- I have hoping for more cooked dinners soon. We ended up at John Harvard's Pub for an early dinner and some yummy beer they brew themselves.

We were exhausted when we got back, and Chloe was glad to see us. My neighbor had come over to let her out and play with her a couple of times so she wasn't alone all day!

Sunday I was totally exhausted, but Jim, Emma and Brenda managed to find the energy to go to Newport, eat lunch and tour a mansion. I stayed home in my darkened bedroom and recuperated!

Now, onward to the work week.