First day at the beach

It's been a very drizzly, rainy week for the most part -- reminds me of living in Belgium or visiting Ireland. We did have two nice days this week that were sunny and quite warm at least in the middle of the day. On Tuesday I went to school to eat lunch with Emma as part of the school's reading week. Parents were encouraged to come and have a picnic lunch and read with their child. It was actually too hot to sit in the sun and mid-day and we moved to the shade. That same day Emma's friend (and our neighbor) Kayla and her family went to the town beach so Emma asked if we could go the next day. It was still sunny the next day, so, we invited Kayla and drove the two miles or so to the Barrington Town Beach which is on the Narragansett Bay. I figured it would be windy and cool at the beach so I brought a sweatshirt and made Emma bring one too and put leggings over her bathing suit. She complained about it, but humored me and wore them. It was beautiful out their and really relaxing to sit on the beach chair and look out at the water and smell the sea smell and watch the girls play and make a tent out of their chairs and towels. Emma and I actually got our feet in the water which was freezing of course. We ended up staying about an hour and then we were all freezing to death. It was very windy out there and we saw two people on surf boards being pulled through the water by big kites. I did some research and it's called kiteboarding, it was fun to watch -- they had wet suits on of course. There were a couple of people walking dogs, some young kids exploring and a group of teenagers actually attempting to sunbathe with bare legs and sweatshirts on! 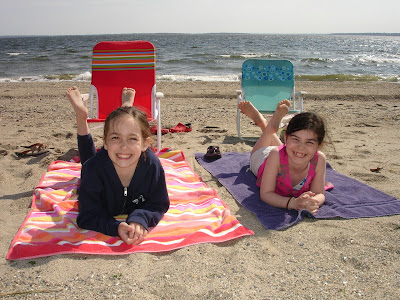 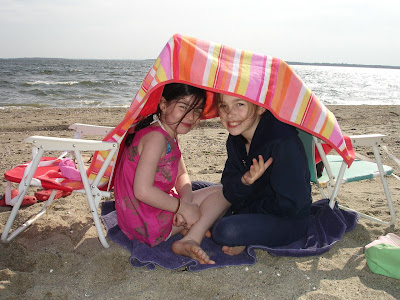 Emma and Kayla at the beach -- lying on their towels and in their tent. Notice that Kayla's Mom didn't make her bring a sweatshirt -- I guess that's what happens when you have more than one child to pay attention to, or maybe when you aren't going to be there to hear them saying they are cold all the time -- to Kayla's credit she really didn't complain at all! 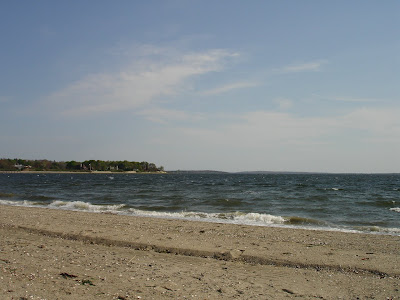 View of Rumstick point from the beach. 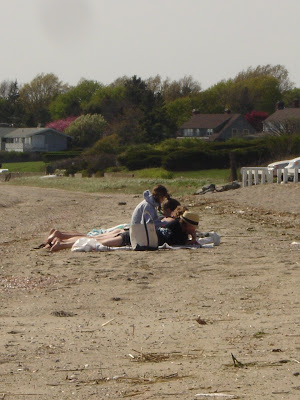 Here are the teenagers sunbathing. This is the view the opposite direction on the beach.
Email Post
Labels: barrington beach Emma Friends