My friend Cynthia over on her blog Flotsam of the Mind recently did a post on all the houses she's lived in along with a memory from each place. This was in response to a writing prompt on Literary Mama (to give credit where credit is due) I thought that was a great idea so I decided to do the same thing. Warning: this may be a long post because I've lived in a lot of houses!

I have no memories of this house at all, but we lived in base housing at Fort Bragg when my Dad was in the Army. There are quite a few old photos from that time of me playing in my paddle pool in the front yard.

Once again no particular memories from this house, but there's a great photo of me and my Dad washing our red VW bug in the driveway

This house I do remember, we lived in half of a large house in Dublin right near a park. I have great memories of begging my Mom to take me to the park to ride my tricycle and swing. I also remember playing MacBeth with our cleaning woman's daughter. We would go inside the big evergreen trees in our yard and pretend to be stirring a cauldron saying "bubble, bubble, toil and trouble." I have no idea how we knew about this play. 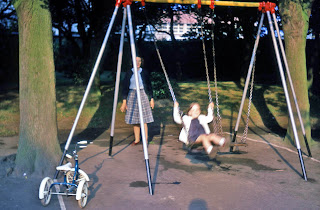 Now, this was a cool house. It was a 4 story Georgian house right on Hampton Court green just around the corner from Hampton Court Palace (where Henry VIII lived) and our house backed right up to a big park where Henry VIII used to hunt deer -- called Bushy Park. We could climb out the downstairs windows  into the park. My best memories are of playing outside -- riding my bike up and down our short, dead end street, and playing in the garden of the big house at the end of the street. It was an old peoples home at the time and I was friends with the gardeners son Piers. In my memories we played out there all the time, mostly unsupervised! -- I guess I must have gone to school too though. 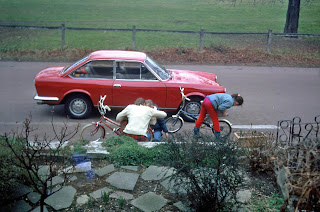 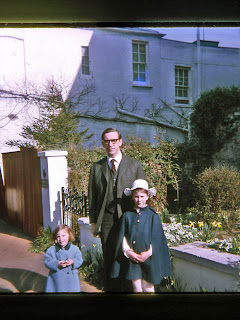 We were renting and had to move because the homeowner was moving back in. My parents bought this huge house a bit further out from London where my Dad worked. He took the commuter train in from the stop in the village. I had the coolest bedroom with one wall that was all a collage of various animals that the previous occupant had put up. I loved it and left it there. I also remember -- again -- playing outside a lot with my friend Heather who lived around the corner. Her little brother used to talk us into letting his GI Joe rescue our Barbie dolls. He once parachuted GI Joe out the second floor window to save the Barbies! 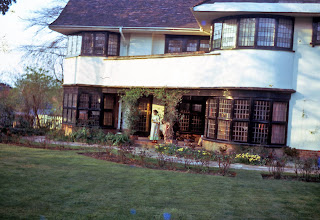 I loved living in Belgium. I was there for half of 4th grade through most of 8th grade. I may be one of the few people who actually liked Junior High School. One of my best memories of this house is having a grown-up dinner party with three of my girlfriends and four guys. I invited my boyfriend at the time -- we were in 8th grade. My parents left us alone in the living room after dinner and went up to the family room. I had such cool parents.  Here's what went on in the living room. 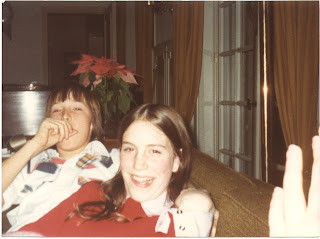 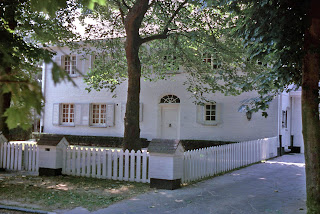 This is the house I lived in for High School. I didn't want to move, and High School was just okay for me. The best thing and my favorite memory from this house is hanging out by our swimming pool. It was so cool to have a pool in the backyard. This is also the house I came home to for Summers for the first two years of college until my parents moved to Germany. And where I lived the year after High School when I came home from Swarthmore College after one semester -- I hated it there.

Well really two dorm rooms and my Sorority House at Lafayette College. I lived in the Sigma Kappa house Junior and Senior Year in two different rooms. It was fun to live in a house with a shared kitchen and living room. If I wanted to be alone I could hang out in my room, and if I wanted company there was always someone hanging out in the kitchen or living room. I spent a lot of late nights hanging out in the kichen with my sorority sisters chatting  etc...

Again this was a dorm room. I studied abroad the second semester of Junior Year and it's very important because that's where I met my husband Jim. We were both on the Vanderbilt in Germany program and had rooms in the same dorm. I remember spending a lot of time studying together in one or the other of our rooms, and also cooking dinners together in the dorm kitchen. I remember other things too, but they are not going to be shared here. The other big memory from this "house" was that there was only one -- yes one -- phone for the whole dorm. It rang in this little office on the main floor and if someone was there it got answered and someone went to get you. If you were expecting a call you had to hang out down there. There were some pay phones too for outgoing calls. And for all you youngsters this was well before cell phones -- way back in the mid 80s!

My first real job as a Management Trainee at Citibank. Also the place from which I was married. Spent lots of time by the pool in nice weather and loved having a porch off of my bedroom and off of the living room where I could eat meals.

This seems like a good place to stop for now. I think this is going to be two posts. It's time to go to bed!
Email Post