Last weekend was a whirlwind of guests and Nutcracker ballet rehearsals and performances. Emma had two parts and had been rehearsing them every Saturday afternoon since early October so it was exciting to be at show weekend for both of us. She had two roles -- one as a Majorette (usually soldiers, but the director tamed the battle scene a bit and wanted to use a female role since all the dancers were girls). They fought off the mice with large wedges of cheese (made out of foam). The choreography was neat as the mice were played by slightly older children and one of things they did in the "fight scene" was lift the majorettes up and twirl them around. In the second act Emma was one of Mother Ginger's Polichinelles (or gingerbread "men" cookies). There were six of them and they emerged from under Mother Ginger's skirt mid-stage and did a very cute dance. The costumes were made of foam and were slightly stiff so their movements, while graceful looked like cookies trying to dance. They lots of laughs and aplause. I helped out backstage on Friday at the dress rehearsal and at Sunday's performance mostly helping dancers with props and quick changes. It was fun -- much better than "babysitting" a whole class of young dancers while they wait to perform for a few minutes -- which was what I had done for Emma's recitals in the past. I felt a part of the show. Then on Saturday I got to see the performance with Jim and my Dad and Hazel who were visiting and our friends Karen and Mark who drove an hour from Connecticut to see Emma dance (which was really sweet). I was enjoyed the whole show -- and particularly enjoyed the pas de deux at the end with the only two professional dancers in the show who played the Nutcracker and the Sugar Plum Fairy. The lifts and positions were amazing. I snuck out to watch it again on Sunday after everyone was in their final costumes. I also learned this year -- thanks to a handout Emma's teacher gave her -- that the Nutcracker ballet story is based on a book by E.T.A. Hoffman called "The Nutcracker and the King of Mice." This explains some of the creepy/wierdness of the character Drosselmeyer and the whole dream scene since Hoffman is a German writer and in my experience as a German minor a lot of their literature is a bit odd, or creepy or depressing.

Anyway, the photo below shows both of Emma's costumes on the rack in the dressing room. I love her new ballet teacher, who also runs the studio and directed the show. She is so organized! All the costumes were rented and had the performers names taped in the them and on the hangers. All the dancers had their own assigned chair and space. All the props were layed out on tables backstage and labelled too! I wish more of you could have shared this experience with us. 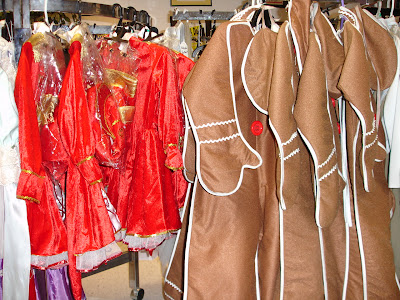