2019 in Review, or, The Annual Christmas Letter

Greetings! I just got the photo above taken by Dad and Ellen's friend Steve Williford and I love it.  For some reason there aren't that many photos of the three of us together and we've never had a professional photo session done with the three of us. So this photo isn't on the Christmas cards because I get itchy and have to get those made by Thanksgiving -- but you can enjoy it here.
Perhaps you are wondering about the walking stick Jim is holding in the photo -- well hang on and I'll get to that in a bit. 2019 started out for us with a big bang in the form of a flooded basement -- not the inch or two we've had before but two major events within a few days that knocked out the water heater and got as far as the finished side of the basement, soaking the carpet. Jim was home alone because Emma and I had gone down to visit Mom for New Years. Jim had planned to go, but we'd had a bit of water in the basement just before Christmas and a lot more rain was forecast for New Year's so he stayed home to monitor the situation and a good thing he did too. What he did was amazing. He managed to rescue all of the important things stored down there, including Emma's childhood books, and toys we'd saved. Did you know that a battery powered Barney doll can still talk after living in a box for 13 years and getting a bit wet?
[Note: If you are already bored and want to skip right to what Emma's been doing then scroll down to the bottom of the page!]

I know he didn't sleep for at least one night. Our handyman, Jim Polando of Home Solutions, was also a total rock and hero, helping us to figure out what was going on, rigging up a temporary solution, pumping water out of the basement, and more. The upside of a basement flood is that you are forced to get rid of a bunch of junk that you've been hoarding there for no apparent reason. We took full advantage of the dumpster that was outside for the carpet, etc... and added a lot of things that should have been tossed long ago. It was very cathartic. Thanks also to my awesome husband we have the cleanest, most organized basement ever -- thanks to his coordination skills, an additional super powerful sump pump -- plus a more powerful original sump pump, and a whole-house generator to run them (too powerful to run on battery backup) when the power inevitably goes out during a storm when we most need them.
The rest of the winter was fairly uneventful, thankfully. We visited Emma at Franklin & Marshall College in Lancaster, PA in February and visited with my sister and her family at the same time since my niece Amelia was competing in an Irish Dance Competition in Lancaster. I ate Nepalese food for the first time. Lancaster is a very hip small town with lots of wonderful coffee houses and restaurants. If you don't believe me you can read what the Baltimore Sun had to say about Lancaster as a fun weekend getaway.
The weekend before my birthday, March 13, was also a Providence Singers concert weekend, which was a great way to celebrate turning 55 -- I'm now solidly in my mid-fifties and can't get away with saying early fifties anymore.  The concert theme was "Songs of the Spirit."
Spring was a bit more eventful. April whizzed by and we moved Emma out of her Freshman year dorm room the first Friday in May and drove straight to Dad's house to celebrate his 80th birthday a bit late (but we wanted to include Emma). It was also the Home and Garden Tour weekend on the Eastern Shore of Virginia. This is an event I love, and all of the houses were in the lovely town of Onancock, VA about an hour south of Dad's house in Snow Hill, MD. It was even warm enough there to swim in the pool -- which we all enjoyed -- especially since it was definitely NOT warm enough to swim outside back in Rhode Island. 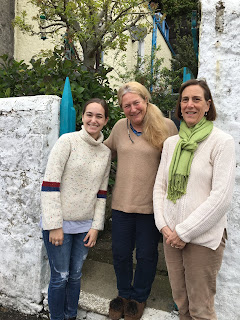 In May, after my final Providence Singers concert of the season where we premiered a magical contemporary piece called The Wound in the Water by Kim André Arnesen, Emma and I took a Mother/Daughter trip to Scotland. Something we've been wanting to do for a long time. Emma chose the place. We spent a week, with a couple of days in Edinburgh and then several days on the Isle of Mull. I was brave enough to drive on the "wrong" side of the road, and am now also an expert in driving on Single Track Roads -- which are roads with two-way traffic that are only wide enough for one car so there are places to pull over so cars coming the other way can pass -- these make up the majority of roads on Mull. The main roads weren't too bad with lots of passing places but if you got off the main road it was pretty nerve wracking. I lived in fear of having to back up to a passing place on one of these windy narrow roads.  It was so wonderful to get away from it all and have so much time together. We made good traveling companions as well. I loved the Isle of Mull and would go back anytime! We took a day trip to the Island of Iona just off the coast of Mull, and also a wet (this was the only day it rained all day!) but wonderful boat trip to see Fingal's Cave on the Island of Staffa and Puffins up close on another of the Treshnish Islands.  We also visited the home of my McLaine ancestors who were originally from Lochbuie on the Isle of Mull.  They were originally part of the McLean Clan, but two brothers had a disagreement and one moved down the road, changed the spelling of his name and started his own Clan. The McLeans still have a large castle you can visit, Duart Castle, but the McLaines just have a ruin, Moy Castle. Oh well -- I thought Lochbuie was magical -- even more so than Iona. I wrote about it here. We stayed in a terrific Air B and B in the town of Tobermorey on Mull and the hosts were so friendly it was like staying with friends of the family -- they even had dogs so I could get my pet therapy.

Edinburgh was great too and we stayed in an "ApartHotel" and were upgraded to a large two bedroom, two bath apartment at no extra charge. We ate out at lunch and shopped for groceries at the nearby Tesco for dinner. We explored as much as we could in a day and a half, including some things I didn't visit when I was there with Jim back in 1996. I particularly like the living history museum in one of the tall apartment houses on the royal mile called Gladstone's Land that dates to the 1620s and really showed how people of various social and economic classes would have lived together in this building with the fancy apartments on the middle levels and the cheaper ones on the top and on the ground and basement levels.  I made Emma dress up and she was a good sport and even let me take her photo. There weren't any other visitors when we were there and the guide really wanted us to have the whole experience and told us lots about the house! We also had to have a photo op by the cafe where R. K. Rowling wrote the first Harry Potter book. 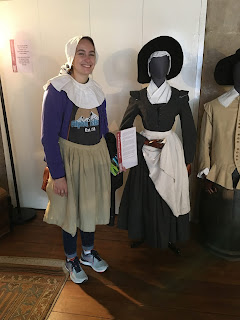 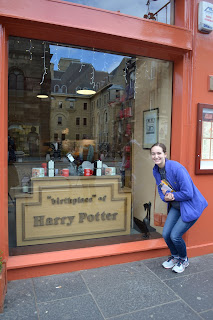 If you are interested I posted lots of photos from the trip to this album on Google Photos.

Two days after we got home Jim was in a car accident and was in the hospital for a few days and then had rehab/physical therapy which he could do at home. He isn't allowed to drive for six months, but we conveniently work at the same place! and as a Professor, he can work from home in the Summer which he did while recovering.  He was hard at work on his latest book which came out last month, A Brief Guide to MaritimeStrategy.  If you'd like to follow Jim's work he's on LinkedIn and has a website, The Naval Diplomat. That ushered in Summer with a bit of a bang but it was lovely and long -- with lots of time with Emma. We snuck away for the Fourth of July for a quick visit with Mom and my sister's family at the Jersey Shore in Stone Harbor, NJ. In mid-August Emma went back to college and I made a trip to Dad's first to pick up the stuff Emma had stored there and I got to attend and co-host a chamber music concert held in his house as part of a week long festival. What a unique experience that was.
Then it was September and time for Providence Singers rehearsals to start up. We had a busy Fall. The women performed Holst's The Planets with the RI Philharmonic in October, then the Singers had their own concert where we did the Faure Requiem and a contemporary piece called Luminosity by James Whitbourn, which featured dancing performed by members of the RI State Ballet. Yet another very unique experience, then just this past weekend we did Handel's Messiah with the RI Philharmonic.  Somewhere in all of the this I also still work full time as a Librarian and department head at the Naval War College Library and commute an hour each way. Needless to say I listen to a lot of audio books and podcasts, and have been enjoying more time with Jim as we are carpooling.  I've said way, way too much and will turn this over to Emma. 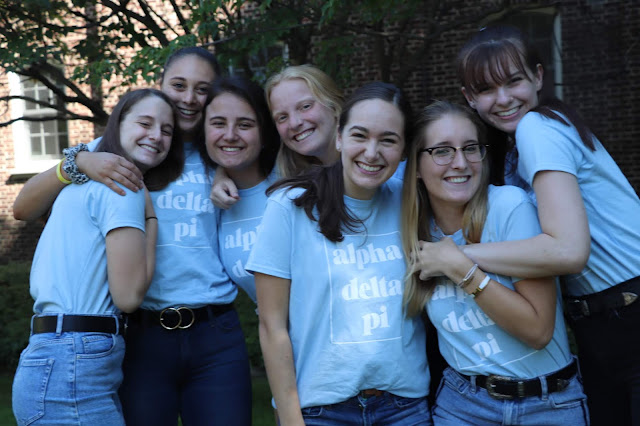 From Emma: In May, I finished up a busy first year at Franklin & Marshall College. During the spring semester, I joined Alpha Delta Pi which is one of the five sororities at F&M. Also in the spring semester, my friend who is in another sorority at F&M decided to start a Greek Life Bible study within InterVarsity Christian Fellowship and it has been an exciting year getting to see that ministry grow! We will both be attending a Greek Life InterVarsity conference in February and are hoping to expand even more in the new year! Over the summer, I worked as a nanny for a family from our church. They have two little girls who are 6 and 9. I headed back to campus early in the Fall for HA (F&M’s version of a RA) training. I’ve really enjoyed my role as an HA and have 16 very spirited residents who always keep me on my toes! I also ended up dancing in a piece by José Limon this semester in the Fall Dance Concert. I met so many wonderful people through Dance Company and am excited to do it again next semester! In November, I was elected Vice President of Finance for Theta Lambda chapter of ADPi which will be quite a different experience for me. I’m also looking forward to primary recruitment coming up in January! In the new year, I will be declaring a double major in History and Government. 2020 should be an exciting year as I hope to study abroad in the Fall! 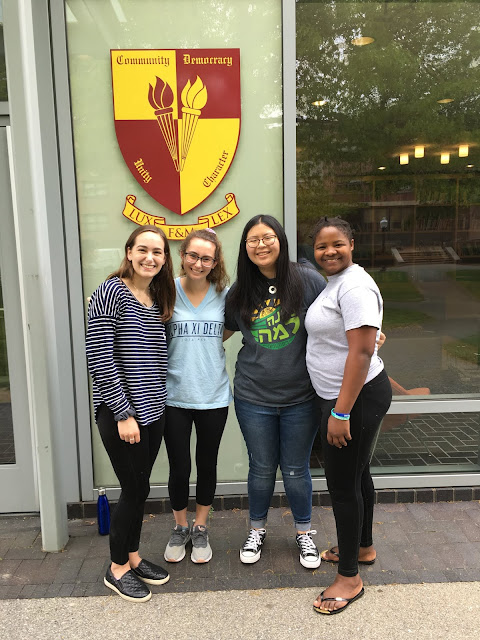