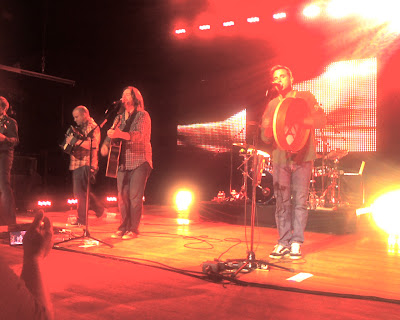 Wow, what a fantastic concert last night! Jim and I had front row seats and the view in these photos is our actual view taken with my cell phone -- no zoom or telephoto lens. They played at Lupo's in Providence right downcity on Washington Street near Trinity Rep. It's a great venue. It reminded me of what the Georgia Theatre could be like (and might be now that they are renovating after the fire). The basic set up is the same with a stage and an open floor area by the stage with a bar/club area behind.  There were 3 bars open -- so very short lines for drinks as well as lots of unreserved seating on couches and benches.  Then above there's a large balcony with fixed seating.  For this concert they put some chairs and reserved seating on the floor by the stage which is where Jim and I were sitting.  Note: the ladies room was huge, clean and had doors on the stalls!! No line during the band's break.

All this -- and we only bought the tickets on Saturday for yesterday's show.  They are a great group and have a definite following, but are still accessible and affordable too! Only $35 for each seat!  Also, I much prefer to listen to this type of music in a casual setting with a drink in hand -- rather than in a huge concert hall where you can't get up and dance.  It was a real treat to be out just with Jim, on a weeknight, in the big city.  We were sitting/standing next to a couple in their thirties. They reminded Jim and I of us when we went to our first Great Big Sea concert at the Paradise in Boston in 1999.  She was pregnant just like I was at the concert in 1999 -- and they just seemed to be a younger, more energetic version of us.  For one of the encores the band dedicated a song to the youngest member of the audience -- my front row neighbors unborn baby. It was very sweet.  Plus -- the lead singer is just plain FUNNY -- and entertaining.  So cool to see all the instruments they play up close: fiddle, recorder, tin whistle, accordian, bodhran, guitar, bass guitar, drums and some other percussion instruments I didn't recognize.  My favorite thing is the acappella bits they do where they stop playing instruments and sing in close four part harmony -- with maybe just the bodhran.  Then when they've lulled you with that they will break out all the instruments and pick up the tempo and start in on what I guess is called celtic folk rock?

Now I want to go out and have adult fun again soon -- only it would be better if it were a Friday or Saturday so I don't have to get up in the morning.  This morning was a bit rough -- even though we were home by 11pm, I was too keyed up to go to bed until midnight which is a couple hours past my normal bedtime!