Recovering from #AALL2009 and surviving humidity

I got back from AALL (American Association of Law Libraries) conference on Wednesday evening and I swear I am still tired -- though it might be the humidity. We only have one air conditioner in our house here in Rhode Island and it's in the family room so unless I want to spend all my time there I just have to sweat -- like my wine glass is doing right now. I am thinking about giving in and turning on the AC again, but the cheap part of me is holding out right now. I started out today by sweating my way through choir rehearsal and the service at Grace Episcopal Church in downtown Providence. We normally go to St. John's in Barrington -- not that we've been there recently -- but I know the choir director at Grace Church from when we lived in Newport and he told me that they have a "pick-up" choir in the Summer and would I like to come sing with them, so I did. No AC in the church and no airflow, but singing was fantastic -- I always forget home much I enjoy it. We did an Elgar piece -- Ave Maria, sang the psalm and did some neat hymns too. Grace is a lovely 19th century large church with stained glass etc... and it's right downtown Providence. I will probably sing with them a few more times this Summer. They have a boys choir during the regular year for most services, but do use the "pick-up" choir for some services.

Yesterday we had a family day trip to Plimoth Plantation. It's the first time we were all together since the end of June when Emma left for her 4 weeks at sleepaway camp. She got home while I was at AALL. We've been here in New England for two years and were embarassed that we hadn't made it to Plimoth yet. I read and liked a lot the book Mayflower by Nataniel Philbrick so it was particularly interesting to visit the recreation of a Wampanoag settlement and the 1627 Pilgrim settlement. The interpreters in costume and in character were absolutely fantastic -- they never broke character and you could ask them any questions you wanted. The weather yesterday was also cooperative. It was lovely, sunny and breezy and only a bit too hot, but who's complaining after Friday's horrible weather. After we finished touring Plimoth we came home via the LLBean store in Mannsfield, the Borders next door and then had dinner at Bertucci's also in the same shopping area. The photo below of Emma and I was taken by Daddy at Plimoth. 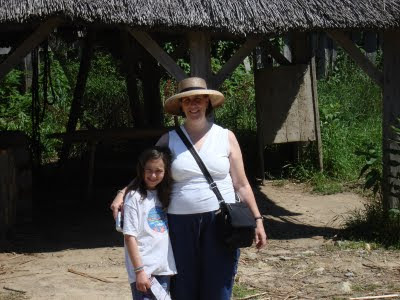 Since the weather was awful on Friday, humid, cloudy, pouring rain at times etc... Emma and I retreated to the air conditioning in the family room and then headed to a movie. We went to see Aliens in the Attic which was laugh out loud funny, and age appropriate for my 9 year old who was happy that Ashley Tisdale (High School Musical) was in it. It's not going to win an academy award, but it was very enjoyable and worth our time.

Thursday was a whirlwind of working for 9 hours to catch up on what I missed in the 4 days I was gone. Then I came home to be Mommy and supervise Emma and two of her friends who were having a sleepover. They did a play for us which was quite amusing called "Three of a Kind. How a mean girl learns her lesson". We got them to hold the performance until Jim had time to run up the road to get a bottle of wine -- I decided this was definitely a dinner theater sort of performance.

The AALL conference was great, but extremely tiring. I just don't have the energy I had when I attended my first couple of conferences in 1994-1995 and was in my early thirties. AALL has also compacted the schedule and everything is crammed into 3 days instead of 4. I didn't get to spend enough time in the exhibit hall and had to skip two 7 am meetings of the PLL-SIS as I was just TOO tired to get up. I did make it to the most important 7 am meeting of the PLL-SIS one person/solo librarian group and was able to meet several other solo librarians and have an excellent discussion -- this was probably one of the most valuable things I did during the conference. I must say though, that all the programs I attended, except one, were really good. It was all new to me this year, in the sense that it was my first year at the conference as a Private Law Librarian after some 13 years in academic law library technical services. Best of all I got to share a room with a good friend and former colleague "Miss Wendy" and hang out with other AALL academic technical services friends, and former UGA colleagues who I miss lots and lots from Athens.
Email Post
Labels: AALL2009 Holmes Family law libraries movies Plimoth singing