Home from camp and to the Shore

So we headed off to pick Emma up from Chimney Corners on August 16th. We got there at 9:45 and she was one of the last to be picked up from her cabin so it was very very quiet compared to Mom's weekend. We said goodbye to her counselors Dana and Ally and to Chimney Corners for this Summer. We headed home with a stop for lunch at Friendly's to mirror our trip up 4 weeks earlier. I then spent two days doing laundry -- that's finished, but there are still some things to go through -- mostly Emma's mementos from camp.

After a short two days at home Emma and I packed up again and headed off to the Jersey Shore to my Mom's house for a couple of days. We wanted to break the journey to my Dad's into two parts and to catch up with my Mom, my sister and of course the twins Amelia and Nikolas. They are really talking all the time now and I was being called to read and play -- I am "Aunt Beouf" pronounced as in the French for beef.

Emma spent part of a day with her new friend from camp Erin who spends the Summers in Stone Harbor on 105th street just a few blocks from my Mom's house at 110th street. I had a great time playing on the beach with Nicky and Mia and then reading and talking with Mom and her friends when they went in to nap. It was a absolutely gorgeous day with no humidity. I even swam -- though the water in the Atlantic never really warmed up this Summer. One of my Mom's neighbors -- a woman in her 90s (she looks like she's in her 70s or early 80s) came down to swim as she does everyday with her thermometer and informed us that it was only 68 degrees and to cold for her. I found her an inspiration -- I want to be that active and look that great in my 90s. 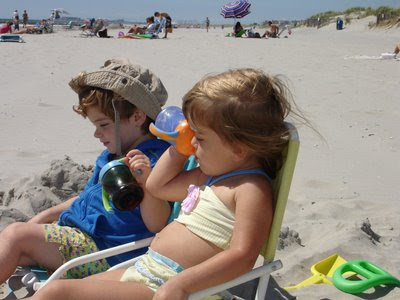 Here are the twins on the beach that day.

After a couple of days there Emma and headed for Cape May to take the ferry to Lewes Delaware and then drive the to Dad and Hazel's house on the Eastern Shore or Maryland in Snow Hill. They are about a half hour from Salisbury, Ocean City and Chicoteague, Va. We were greeted by their two dogs -- who both jumped into the car to welcome us -- Bella was wet so that wasn't the greatest welcome, but you have to admire her exuberance. 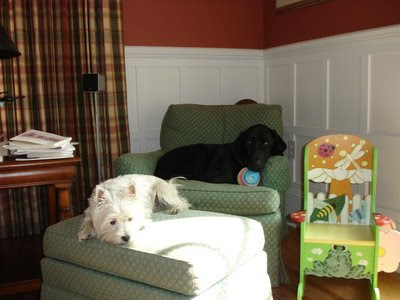 Here they are relaxing after a long hard day -- Bella is the black lab on the chair and Pumpkin is the white west highland terrier on the footstool.

Dad has a swimming pool so we obviously spent a lot of time hanging out around it. We had several fantastic days of lower humidity and sunshine. Emma had a terrific time playing with her friend Hannah who she met last Summer when she was at Dad's. Hannah lives around the corner from Dad and just started 4th grade today and she's only about 6 months older. They play really well together and I get lots of time to read or do whatever as they entertain each other. Hannah's an only child too so I know she enjoys it. They had several sleep overs -- some at Dad's and some at Hannah's. Here they are playing in the pool -- this is actually at Uncle Larry's pool also in Snow Hill where we were for a crab feast (hard shelled blue crabs steamed in old Bay seasoning which we picked the meat out of ourselves). 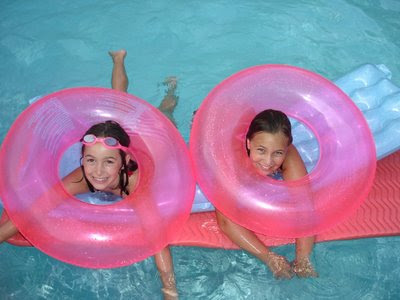 One night Emma helped Dad (Papa) make pizza. He bought the dough from Trader Joe's and they rolled in out into circles and then put all the toppings on. It was really good! 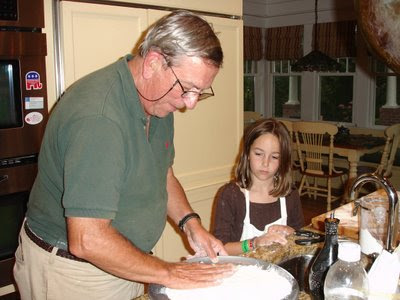 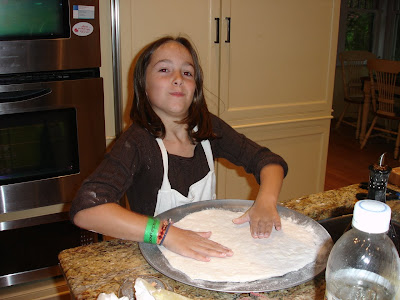 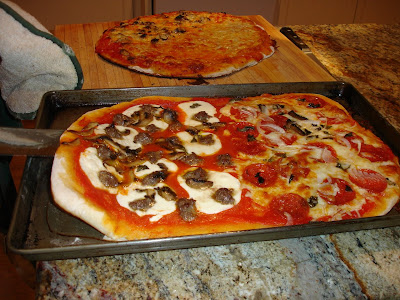 We also got to meet Hazel's daughter Caroline and her boyfriend Joel. They arrived a couple of days before we had to head back to school and work. They live in Paris. Joel is French and Caroline is Irish, but has been living in France for many years. After hearing so much about them it was really great to finally meet them and hang out by the pool and share food and wine and a trip to the water park and a boat ride on the Pocomoke with Uncle Larry and Aunt Sue on their boat. It was another gorgeous evening and we enjoyed wine and snacks. Larry let Emma drive the boat a lot of the way!! Here she is: 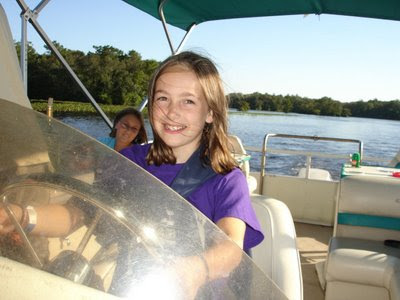 Here are Caroline and Joel on the boat. Emma asked Caroline if she could call her Auntie Caroline and she said yes so that's what Emma called her the rest of the time! Well, she is my step-sister so that makes her an Aunt. 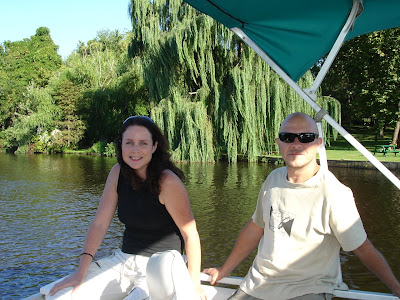