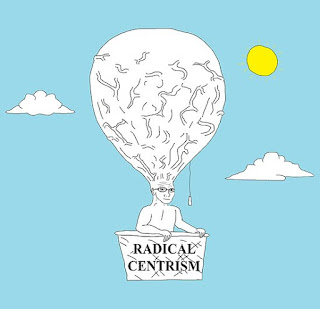 Finally -- I've found my political home --  a tolerant smile at the recognition that we are human, all too human. Too bad it doesn't exist in American politics that I can see!

I just read this excellent article:  Centrism: A Moderate Manifesto from the online journal Quillette

It resonated with me completely. It described my political philosophy and worldview perfectly. The only problem is that this particular political philosophy/viewpoint/practice is almost entirely absent in American politics -- and I would say has been for some time. I'd even say it's lack caused the election of Donald Trump (but we could debate that).

When are all of us in the center -- and I know there are a lot of us that meet this definition -- going to rise up and take politics and political discourse back. And if we want to how in the world do we do so. I've been trying to do it by not backing down in discussions, by sharing my views bravely -- even though I was called "evil" at least once. I don't seek discussions out -- in fact I've been avoiding them lately, but when I find myself in one I do try to be true to myself.

It's a longish article, but well worth your time. In case you don't want to read the whole thing. Here are the bits that most resonated with me.

(1) Centrism does not loath change and (2) it does not accept a transcendental (religious) moral order.


The centrist, not surprisingly, wishes to remain in the center of this continuum, encouraging change when prudent, but discouraging abrupt or radical upheavals. The centrist believes, much more than the conservative, in social progress, and believes that humans have made remarkable economic and moral advances in the past 500 years.  The conservative is correct that the past is full of wisdom for the future; but the progressive is correct that the past is also full of errors, dogmas, and barbarism. Perhaps one could put it this way: The past is like an old, unused, and rotting library; the books are full of wisdom, but the building is ruined by insects and decay. The conservative wants to keep the library; the centrist wants to keep the books; and the progressive wants to burn the whole thing down and start over.


One should not seek a “conservative” answer to poverty or a “liberal” answer to immigration. One should seek the best answer. It is highly unlikely that any political party has a monopoly on truth.


For the centrist, one of the more disturbing trends of the past 15 years is the radical moralization of policy preferences. It is becoming more and more difficult to discuss political opinions openly without being slandered as a racist or a sexist. This is abhorrent to a centrist because it circumscribes acceptable discourse so sharply that the public loses the chance to debate all angles of important social policies. Take immigration as one example. It is an exceedingly complicated issue and any comprehensive immigration policy will include painful tradeoffs. If the rate of legal immigration is restricted, then many ambitious and morally upstanding people will be denied a chance to join thriving societies to fulfill their potentials. On the other hand, if the rate of legal immigration is dramatically expanded, then it will cause continued social and cultural disruption, resentment, and quite possibly lower wages.

There are many good-natured people on both sides of this debate. However, many on the Left [and I'd say on the right too] not only disagree with restrictive immigration laws, they denounce those who support them. This is a pattern that is repeated for many policy debates: affirmative action, free speech, policing, criminal justice reform, pay gaps, and on and on. Imputing nefarious motives to people voicing well-intentioned concerns or preferences is an act of extremism because it causes hostility and polarization. Those who are denigrated as knuckle-scraping bigots understandably become bitter and quite possibly more extreme. And as moral accusations fray trust and goodwill, the center falls apart.

Perhaps this is what centrism really is: a tolerant smile at the recognition that we are human, all too human.