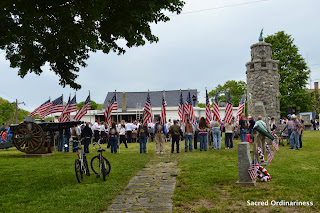 This morning Jim and I headed out to West Warwick to take part in their Memorial Day Celebration. As always I was amazed by how eloquent and what a great speaker my husband is. I also loved the Patriotic Biker group who stood around the Ceremony area holding large American flags. Lastly -- another thing that really brought home to me the reality that this is not just history we are remembering, but also the present was when the Mother's of two soldiers who died in the Middle East just in the last ten years -- laid a wreath on the Memorial to those who have died in the Global War on Terrorism. I've included some more photos below the text of Jim's remarks. Thank you -- and thank you to our Veterans. 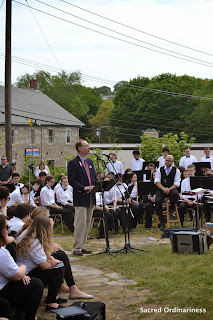 "Two thousand years ago the Greek historian Plutarch believed that men of action could learn how to conduct themselves virtuously by studying the lives of famous Greeks and Romans.

By comparing and contrasting among great figures from antiquity—including Pericles, the first citizen of classical Athens; the Macedonian conqueror Alexander the Great; Julius Caesar, a figure so consequential that his very name came to mean emperor—we can learn what is worth thinking and doing. Just as important, we can learn what’s worth shunning because it’s low, or base, or unbecoming.

Now, I am no Plutarch. No one will read my works in two thousand years. But I want to step onto that eminent Greek’s turf this Memorial Day, and tell you a story about one of my personal heroes: a U.S. Navy Medal of Honor recipient by the name of Ernest E. Evans. I believe Plutarch would find Evans a fit subject for one of his biographies.

And he’s not just my hero. So revered a figure is Commander Evans that a building at the Naval War College is named for him. Evans Hall stands directly across from the Surface Warfare Officers School, where each generation of American naval officers—including myself in the late 1980s—is groomed for seamanship and combat.

They who go down to the sea in ships—gray-hulled U.S. Navy ships—live in Evans’s shadow while they’re with us in Newport.

Who was Evans? No one has written a biography of him. He lived a short life, like many of those we commemorate on this day. Maybe we just don’t know enough about him to fill a book. But I’ll relate what we do know. It’s a parable of valor and derring-do that no one would believe if it came out of Hollywood.

Commander Evans looked like a stockier Clark Gable, for those of you of an age to remember the actor of Run Silent, Run Deep and Gone with the Wind fame. And he was “a fighting Cherokee Indian…short, barrel-chested, loud of voice, a born leader,” according to Samuel Eliot Morison, the chronicler of U.S. naval operations in World War II. That meant his nickname at the U.S. Naval Academy at Annapolis was, inevitably, “the Chief.”

Nor was this nickname misplaced. As Morison notes, the Chief was the sort of leader all mariners—indeed, all warriors—aspire to be. Evans was the sort of person who strides into a room and takes it over through force of character. You’ve known the type. My first and best boss in the navy, a Filipino named Ernesto Zambrano, stood just over five feet tall. Yet a roomful of people of all ranks would go quiet when Mister Zee walked in.

Evans wasn’t a tyrant, but his officers and men feared him. Or, more precisely, he commanded such respect that they feared letting down the Old Man, as navy crews have called their skippers since time immemorial. Disappointing him was the worst failure they could imagine.

Evans had a chip on his shoulder. He was ashamed of being forced to flee from the Battle of the Java Sea aboard the destroyer Alden in early 1942, when the Imperial Japanese Navy was rampaging through the South China Sea.

When Evans assumed command of the destroyer USS Johnston in 1943, he channeled John Paul Jones, who once made the Narragansett Bay his operating grounds. He told well-wishers at the ship’s commissioning ceremony: “This is going to be a fighting ship. I intend to go in harm’s way....Now that I have a fighting ship, I will never retreat from an enemy force.”

And he made good on his vow never again to flee. He quickly earned a reputation for venturing into close quarters with the enemy to support ground troops ashore. Off Guam, for instance, Johnston’s gunners fired until the barrels glowed red—and then Evans demanded, and got, more ammunition beyond the ship’s allotment.

In October 1944 Johnston was part of Task Force 3, or “Taffy 3,” cruising the Philippine Sea, northeast of Leyte Gulf and due east of the island of Samar, in the Philippine Islands. Taffy 3 was Admiral Clifton Sprague’s flotilla of 6 light, “jeep” aircraft carriers, 3 destroyers, and 4 destroyer escorts. Its mission: to cover General Douglas MacArthur’s landing force on Samar.

Taffy 3 was not a battle fleet. And yet on the morning of October 25 it had to fight for its life against one of the most formidable armadas ever to sail Pacific Ocean waters—a force built around the battleship Yamato, the biggest, most heavily gunned battleship ever built.

Think about that. Johnston was a 2,700-ton destroyer, or “tin can,” festooned with five 5-inch guns and some torpedoes. That’s lightweight armament. Arrayed against Johnston and her consorts was an enemy force that was both superior in numbers—boasting 23 vessels, all equal to or exceeding the American tin cans in firepower and displacement—and headed by a 70,000-ton dreadnought.

Each of Yamato’s 18-inch gun turrets weighed as much as a destroyer. Her nine main guns, each 69 feet long, could fling projectiles weighing as much as a Volkswagen over 25 miles. David had it lucky by contrast when he squared off against Goliath.

Admiral Takeo Kurita’s “Center Force” was part of a larger Japanese fleet converging on Leyte Gulf. Kurita’s mission was to sink or drive off the American fleet. That would strand U.S. Marine and Army forces ashore—bereft of air cover, naval gunfire support, and shipborne supplies, and under the big guns of Japanese battleships and cruisers.

If successful the Japanese assault would have slowed down, complicated, or perhaps even halted the American reconquest of the Philippines—and stymied MacArthur’s drive across the South Pacific.

So what do you do when confronted by an enemy force that outnumbers and outclasses you by every measure? If you’re Ernest Evans, you attack!

When Kurita’s fleet was sighted coming over the horizon that October morning, Commander Evans instantly ordered Johnston’s helm hard over. The destroyer turned, rung up flank speed, and charged the enemy before even receiving the signal from Sprague to do so. This was the first of two mad dashes she would make that day before meeting her fate.

Johnston zigzagged her way into firing range for her torpedoes, “or fish,” dodging enemy gunfire on her way. Gunnery officer Lieutenant Bob Hagen swore he could see Captain Evans’s heart “grinning” as Johnston joined battle. She dueled the heavy cruiser Kumano with guns before disgorging her ten fish. Her torpedoes ran “hot, straight, and normal,” scoring a hit on Kumano before she turned to rejoin Taffy 3.

At that point the tin can’s luck ran out. She took three hits from 14-inch battleship guns, losing one of her two engineering plants and half her speed. She lost fire control and steering. Evans lost his shirt and two fingers in one of the blasts, yet oversaw repairs that restored partial control of the guns, and rudder control from the fantail. The ship looked like a wreck.

Then the destroyer escorts started their torpedo run. When Johnston passed them, Evans ordered the rudder hard about so she could provide them with gunfire support. Thus began the second charge of the tin-can sailors.

Johnston engaged the battleship Kongo, and took on a five-ship destroyer squadron all by herself—badgering the Japanese ships into muffing a torpedo attack on Ziggy Sprague’s flattops. Ultimately, though, an avalanche of shells crashed into the ship—depriving her of propulsion and compelling the crew to abandon ship.

Commander Evans made it into the water alive but was never recovered. How he met his maker remains unknown. What we do know is this: Johnston and her sisters threw the Japanese fleet into disarray, preventing it from striking effectively at the carriers. Their audacity left Kurita dazed and confused. He lost all taste for battle—calling off the Center Force’s advance short of its goal. The ground campaign in the Philippines went on.

Taffy 3 wrote a remarkable chapter in the annals of naval warfare. Evans and his shipmates charged a crushingly superior force and won.

So what would a Plutarch take away from the story of Ernest Evans, the Chief? That Evans was decisive. He had swagger. He inspired his men to be their best selves, and empowered them to do their duty. And, most importantly for our purposes today, he was prepared to give the last full measure of devotion for the cause of liberty. That gives anyone who wears the uniform of the United States an example to strive toward.

Can we live up to the standard set by Ernest Evans? I believe so. People of valor live today. Some of them wear military uniforms. I have the pleasure to work with them every day.

But gallantry is not exclusively a military thing. Just read the daily news. How often do we hear about Americans—regular people like us—running into burning buildings, or performing other feats demanding what looks like superhuman courage?

We need not look far away, or into the age of Plutarch or Evans, to find such examples. Thirty-five firefighters have given their lives in the line of duty just this year. Last year a nine-alarm fire engulfed a four-story building on Beacon Street, in Boston’s Back Bay. Fire Lieutenant Edward J. Walsh Jr. and Firefighter Michael R. Kennedy went into danger—rescuing the people trapped in the building before succumbing to flames, heat, and smoke.

They did their duty—and then some. Like Evans, Walsh and Kennedy gave the last full measure of devotion for the common good. I believe the fallen from Leyte Gulf would welcome them into a fellowship of honor, alongside military heroes of old.

Let me close by quoting an General George S. Patton. Shortly after World War II, at a gathering not unlike this one, Patton pronounced it “foolish and wrong to mourn the men who died. Rather we should thank God that such men lived.” Yes. I would only add that such people walk among us today—still. 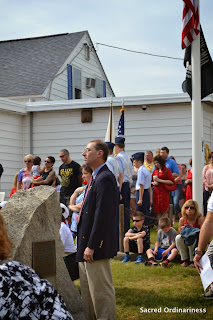 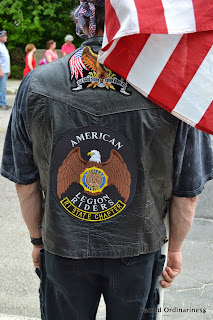 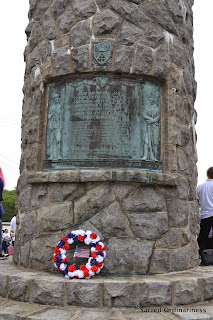 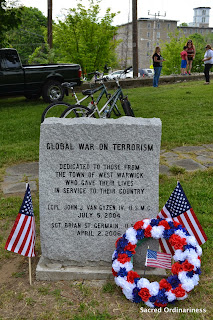