Toronto: Some of my Favorite Photos Day One 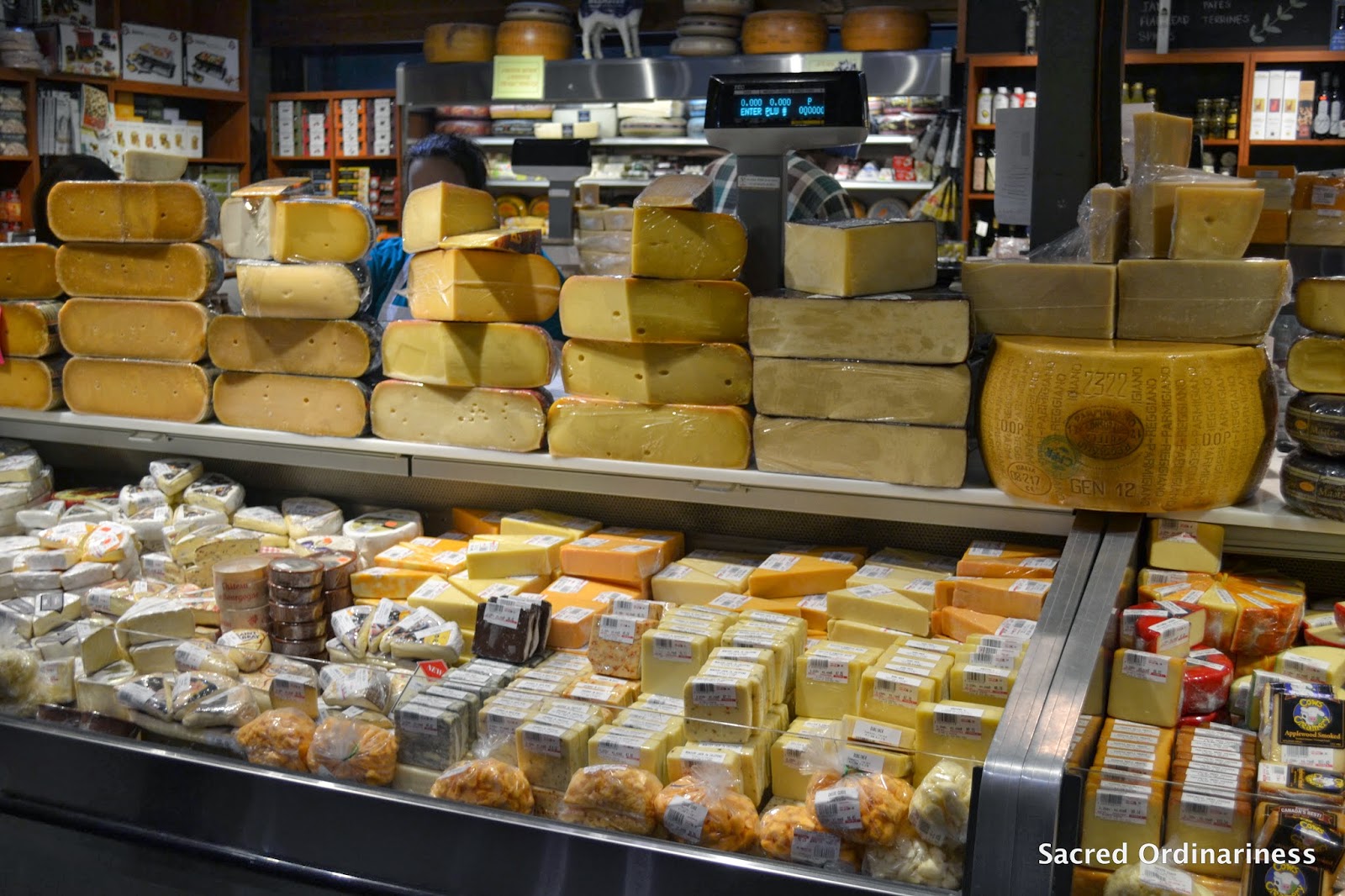 I've never been to Toronto and a couple of weeks ago I tagged along with Jim when he went to Toronto to attend the ISA conference.  We decided to drive the 550 or so miles there because neither of us had been farther than western Massachusetts on this route and thought it would be fun to drive through upstate New York. It was cheaper than two flights as well of course! We made it in nine hours as there was little traffic on a Thursday in late March.

We only had two days to explore and Jim was moderating and commenting on two different panels for part of that time. We did get out and experience a bit of the city though. I spent my first morning at the Bata Shoe Museum. Since we had limited time I wanted to see something that was unique and I'd never been to a shoe museum before. It turned out to be a great place to while away a couple hours by myself and I was surprised by how interesting the history of shoes and of shoe fashion could be. It was raining so I didn't take any photos, but the building itself is very modern and cool. Built to suit its use as a shoe museum and filled with neat shoe related artistic touches -- even the door handles into the galleries. My favorite shoes were a pair of very high platforms boats worn by Sir Elton John.

That afternoon when Jim was finished working for the day we walked over to the St. Lawrence Market not too far from our hotel. All of the food there looked delicious and I enjoyed taking photos. I especially loved the cheese, meat and the flowers. I wish there was a market like this close to where we live in Rhode Island. It reminded me of the York, PA market -- only without the Mennonites and eight-shaped glazed doughnuts and with Asian food and spices. 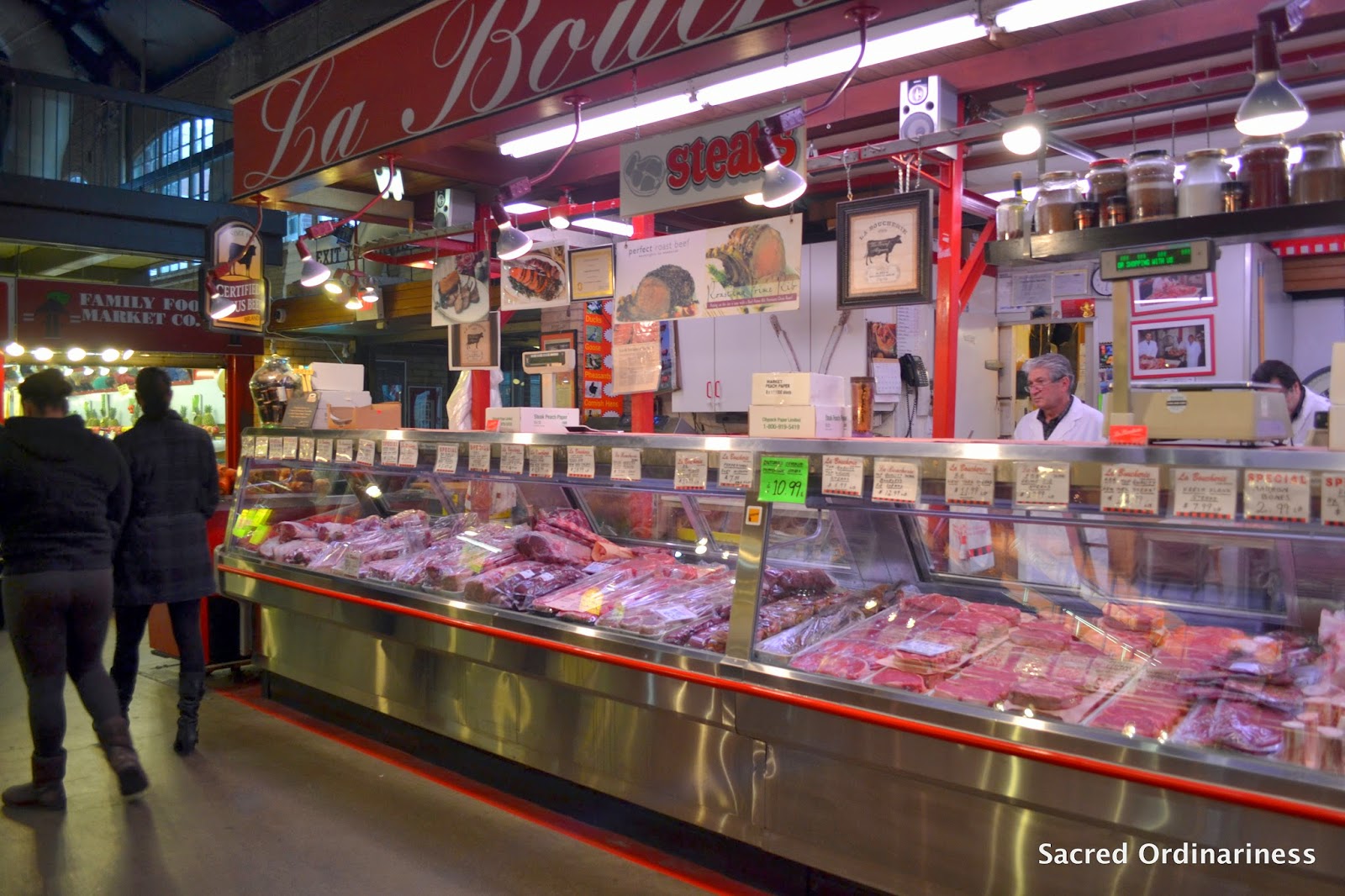 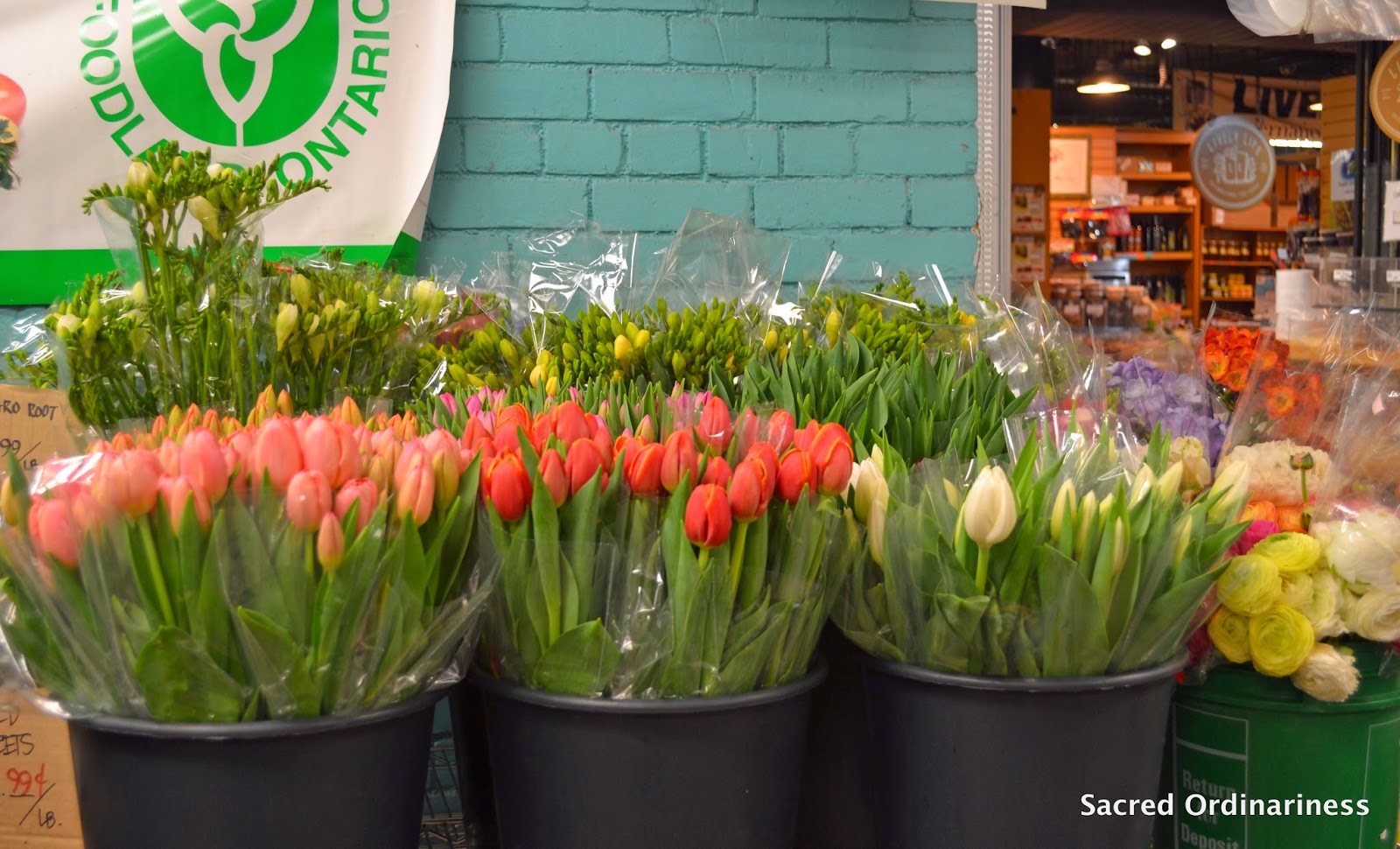 Next we walked a bit further to the Distillery Historic District. This area was once a distillery in the 19th century. All of the buildings have been restored and now house boutiques, restaurants, theaters and art galleries and other spaces for artists. We enjoyed browsing in the stores and bought a couple of gifts for Emma and a funky (but not too funky) pair of John Fluevog shoes for Jim. You can see how neat the restored factory spaces are here in these photos of the Fluevog store.  I also got some neat shots in this area. Really loved the blue in the outdoor dining space at a restaurant in this district. 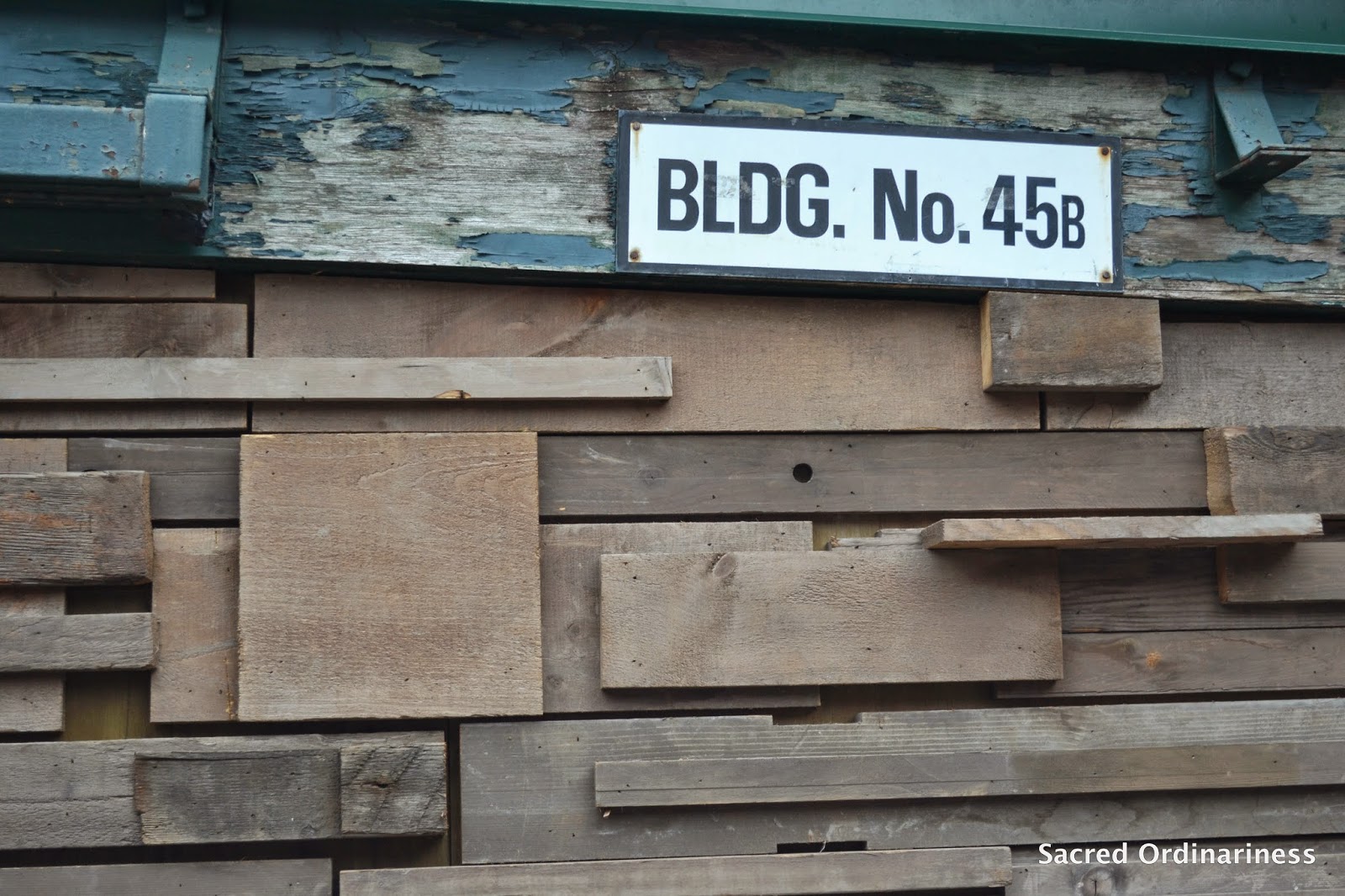 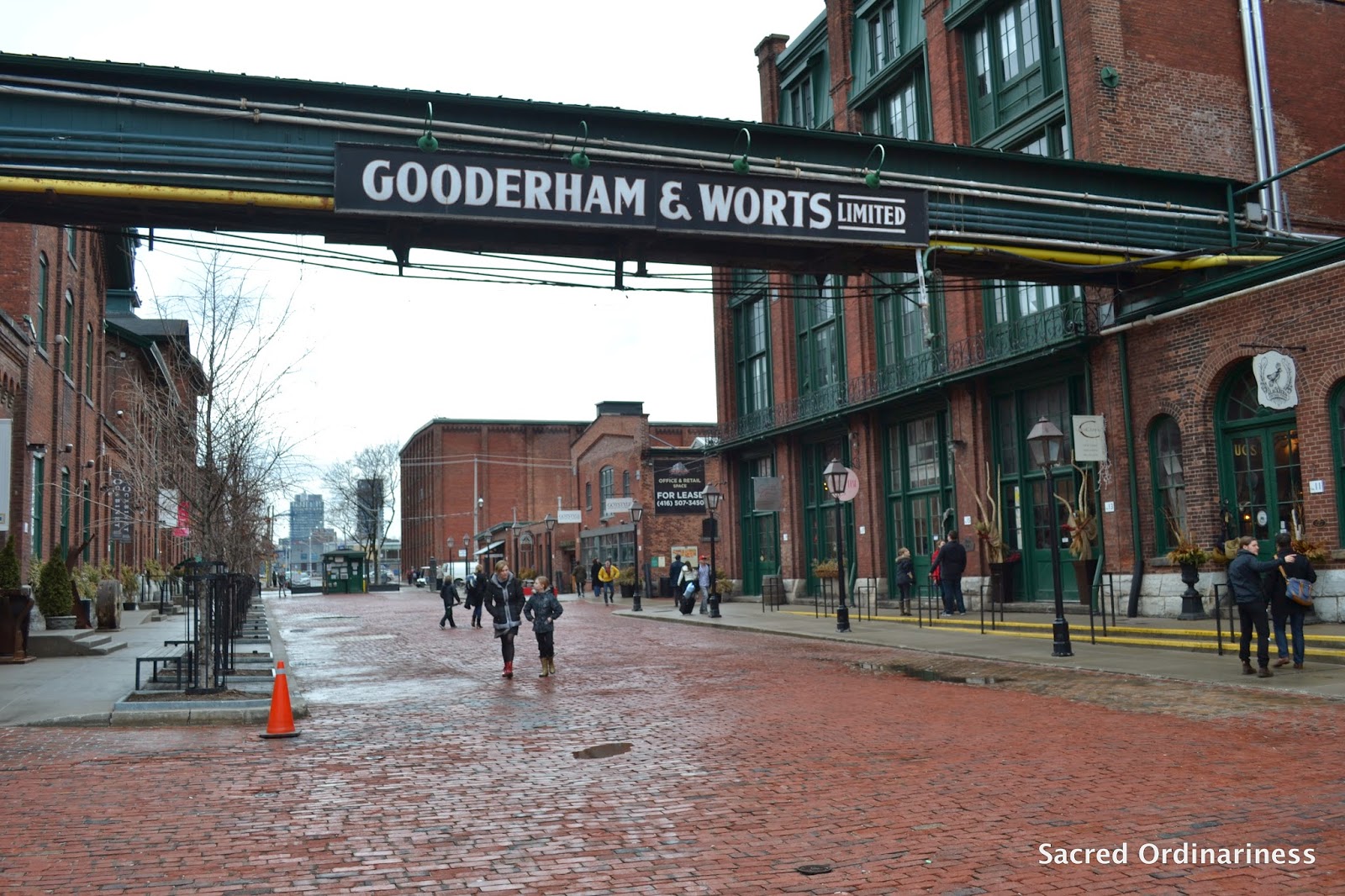 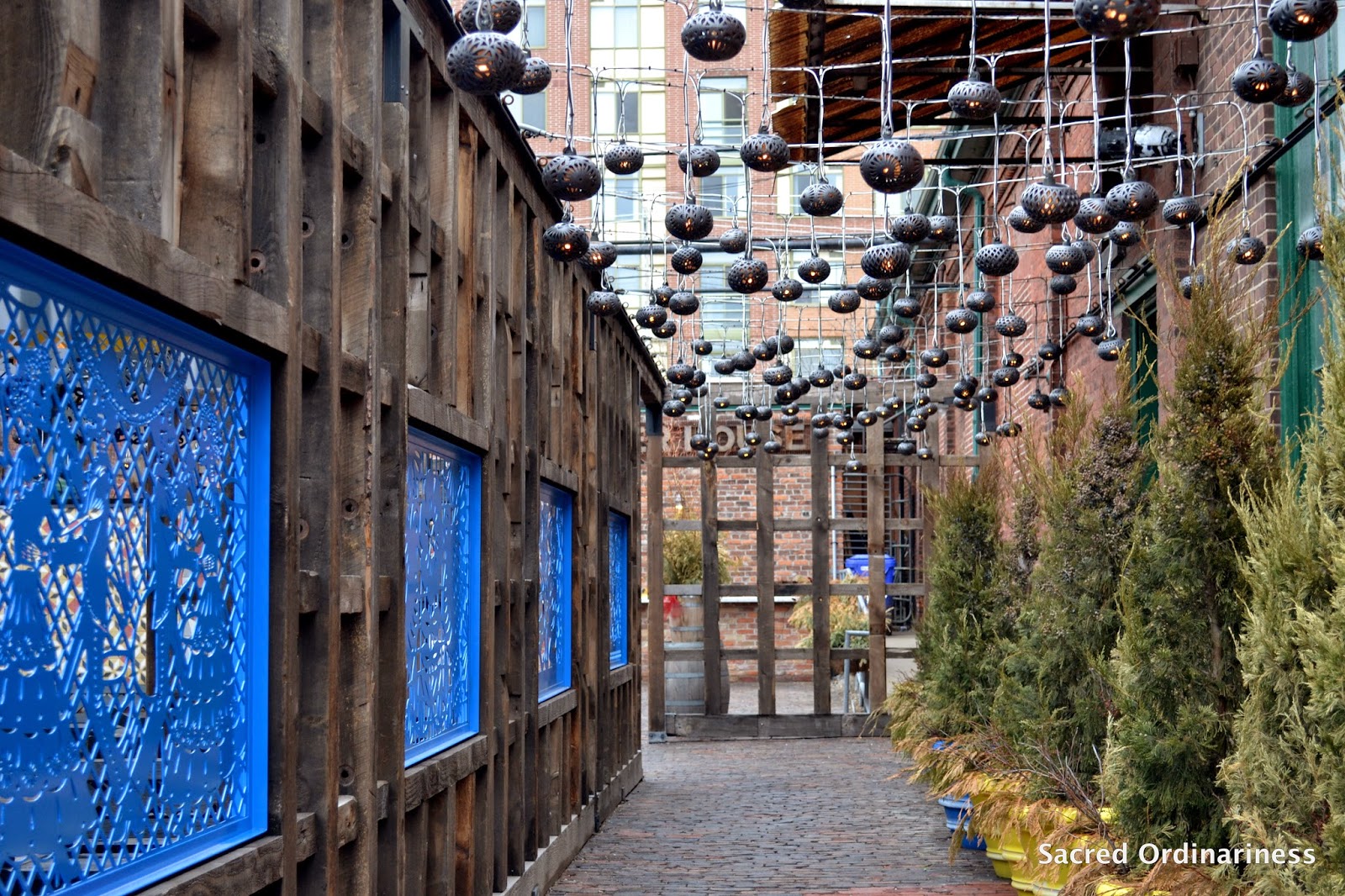 We ended our first day back at our hotel -- the Fairmont Royal York , which was itself a really terrific historic building, dating from the 1920s. We headed to the Library Bar for drinks and finally a light dinner. We tried some local Niagara region white wine which turned out to be absolutely delicious. We even asked the waitress to hold up the bottle so we could take a photograph. Now to find some of this here in the States! I had no idea that the area along Lake Ontario just over the border from Buffalo was known for it's grape growing and wine making. 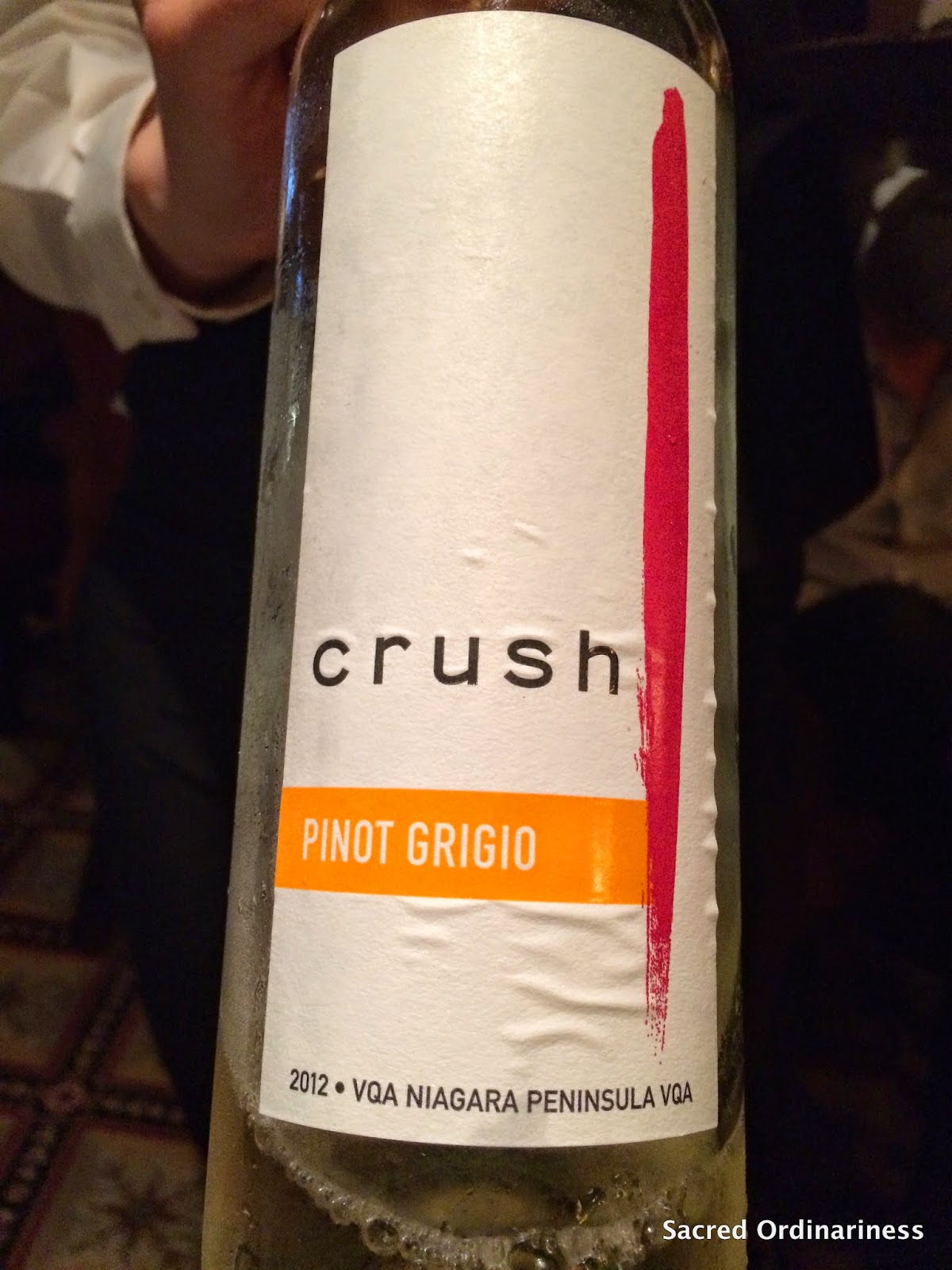