Singing Patriotic songs with the Nuns on the beach 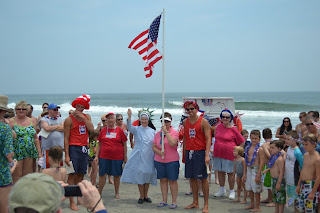 I've been spending a week or two at the beach in Stone Harbor, NJ every year for the past 29 years and no Summer would be complete without a trip to the Jersey Shore. My Mom has a house here on 110th street one block from the Nun's Beach which gets its name because it is next to the a very large house called Villa Maria by the Sea -- a Summer retreat for the order Immaculata IHM. Since the beach at 110th is a surfers only beach we always walk a block up the beach to 111th to swim at the Nun's beach. One of my absolute favorite things about spending 4th of July here is that the Nun's lead a patriotic sing-a-long together with the life guards. This year was no exception. The festivities began with some Nun's handing out American flags while the life guards, dressed up for the 4th, corralled swimmers out of the water to join the fun. Then a Nun led a short prayer for all of our armed service members serving across the seas, followed by the Lord's Prayer and the Pledge of Allegiance. Next we all sang "God Bless America" and "America the Beautiful" and concluded with saying Hip Hip Hurray for the USA several times. I can't imagine anywhere else that has such a unique way of celebrating the Fourth. I know it's my favorite place to be. 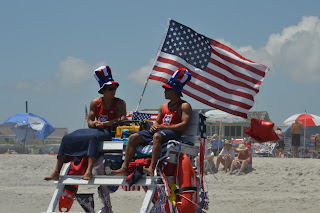 I'm certainly grateful for my freedom and for those who have guaranteed it for me over the years. Wishing you all a great Fourth of July.