Celebrating Summer's Start with a week in Snow Hill 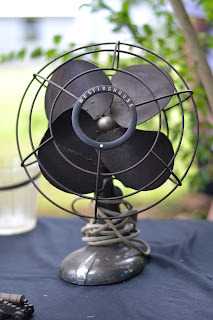 School finally let out just as Summer officially started so we headed south from Rhode Island to spend a week visiting with my Dad and step-Mom at their home in Snow Hill, Maryland on the eastern shore. It was founded in 1686 and is the county seat of Worcester County whose most well known town is Ocean City, Maryland. It's full of history and has some wonderful old homes and churches. We prefer quiet Snow Hill which is several miles inland, from very busy and crowded Ocean City however. Today's entertainment was a local (three blocks down the street) estate auction that was held right in the garden of the house which was also auctioned. I hadn't been to an auction since I was a kid and it was new to Jim who had only ever been to a cattle auction in Tennessee (that sounds pretty cool to me though). I enjoyed listening to the auctioneer and people watching and checking everything out -- it was pretty much the contents of the house -- and of a life -- interesting, but also sobering. We ended up bidding on and buying a great print of the HMS Victory in 1878 for Jim to hang in his office at the Naval War College. We got it for way less than it would have cost to frame it for sure. We just lost out on a cool vintage fan as well.

We left the auction before they were done -- it was just getting too hot. After lunch at home Emma, Dad and I ventured off to get some of the best ice cream anywhere -- at the Island Creamery in Chincoteague, Virginia -- just 20 miles away. The drive down back country roads was gorgeous today as all of the orange lillies are blooming alongside the wheat, corn and soybean fields. I wish I'd stopped to take some photos. I just love visiting down here -- seeing Dad and Hazel is great, but I love this town and countryside and slower pace of life. I've been coming here enough over the last ten years that I know people in town and they recognize me which adds to the small town charm. One more day here and Emma and I are off to the Jersey Shore and Jim is back to work in Rhode Island.
Email Post
Labels: 2013 Geesey Family Photography Photos Snow Hill MD