Here are Jim's remarks from today's Memorial Day commemoration event in Mattapoisett, MA. It was a lovely event and the weather was perfect. Emma and I tagged along and got to see this beautiful southcoast town, ending with an early dinner outside on the deck at Aidan's Pub in Bristol, RI on the way home. 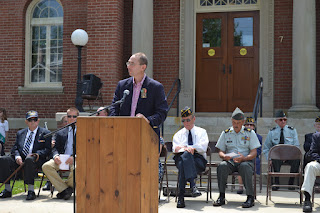 I am honored to speak on behalf of the United States Navy and the Naval War College.  At the same time, it is humbling to realize how profoundly inadequate any words I can say will be to this solemn occasion.  Such was the valor of our honored dead.

What is Memorial Day?  Well, there are the obvious things.  It’s a day for fun.  It gives us an excuse to gather friends and family for a barbeque.  It’s when the community pool opens.  It’s the official start to summer.  And there’s nothing wrong with any of these things.

But there’s more to it than that.  Is Memorial Day about monuments?  Yes, in part.  Our nation excels at physical remembrances.  Think about the World War II, Korea, and Vietnam memorials in Washington.  There’s Augustus Saint-Gaudens’s memorial to the 54th Massachusetts on Boston Common—an elegy in bronze.  New Bedford erected a Soldiers and Sailors Monument at the turn of the 20th century to honor veterans of the Civil War.  In Newport we have a monument to remember students and alumni killed in the attack on the Pentagon on September 11.  Among them is a friend and shipmate of mine, Navy Lieutenant Commander Bob Elseth.

Such monuments are testaments in stone to Americans’ commitment to enshrine the fallen.  And they are everywhere.  Whether you’re here in Mattapoisett, in my hometown of Nashville, Tennessee, or visiting any city across this great nation of ours, monuments are nearby.  You can feel with your fingertips the names of soldiers, sailors, airmen, and Marines who gave their lives in defense of our country.

But there’s even more to Memorial Day than visiting these shrines to the fallen, reading inscriptions recounting their deeds, and marveling at their sacrifice.  War has a human face.  Where most of us see stone and metal carvings, some of us see faces.

I am heartened by the renaissance Memorial Day has undergone over the past decade.  Given the conflicts in Iraq, Afghanistan, and other remote parts of the world, Americans appear newly conscious of the personal sacrifices warriors like these make—as do the families who wait on their return.  This awareness is woven into our shared American experience.  It transcends that which divides us, such as politics, cultural differences, and religion.  And that’s a good thing.  The fallen render valuable service from beyond the grave.  They remind us of the human dimension of war, and of our common heritage.

But there’s something to Memorial Day that runs deeper still.  I am a Navy man.  But let me pay tribute to an Army general who spoke wise words about Memorial Day not far from here.  In 1945, near the close of World War II, General George S. Patton spoke at the Copley Plaza Hotel in Boston.  He declared that it was “foolish and wrong to mourn the men who died.  Rather we should thank God that such men lived.”

Now, Patton spoke too strongly.  He often exaggerated.  It is right and fitting that we mourn the fallen.  But he was right about where we ought to place the emphasis.  He was right to urge the living to cultivate a spirit of gratitude to the dead.  We should be grateful because of the ideals they upheld and their loyalty to their brothers-in-arms.

Patton was an avid student of history, and his words belong to a great tradition in American oratory.  In 1863, nearly 150 years ago, President Abraham Lincoln spoke on the battlefield at Gettysburg, Pennsylvania.  We will hear his complete Gettysburg Address in a few minutes.  It is a speech that remains eternally fresh.

Lincoln insisted that the living rededicate themselves to the high purposes for which the fallen lived and died.  For him the best way to honor the dead was to complete “the unfinished work” they had “so nobly advanced” and for which they had paid the ultimate price.  Indeed, Americans must “take increased devotion to that cause” for which “these honored dead ... gave the last full measure of devotion.”  Lincoln implored Americans to resolve “that these dead shall not have died in vain, that this nation under God shall have a new birth of freedom, and that government of the people, by the people, for the people shall not perish from the earth.”

So Lincoln and Patton insist that we do more than remember the fallen.  In Lincoln’s words, the men of Massachusetts I listed a moment ago gave their last full measure of devotion in Afghanistan this past year.

These are different times from 1863.  We fight not to preserve the Union or abolish slavery but to construct new—humane—governments in foreign lands.  We need not all agree with this cause.  Many do not.  Nevertheless, I believe Lincoln would ask us to pick up the standard—to take inspiration from men such as these—and to resolve that our own experiment in self-government shall continue to survive and prosper.  This remains a cause worth striving for.

How should we do it?  Gathering here is one way to show our appreciation and gratitude, and to refresh our own commitment.  We should, and must, keep doing it.  But how can we project the reverence we feel on this day throughout the other days of the year?

First and foremost, we must recognize that Memorial Day is more than a holiday.  It is an act of cultural upkeep.  The memory of past feats of arms fades quickly if not handed down from generation to generation.  It takes conscious effort on all our parts to preserve that bequest.  I therefore challenge you to teach youthful Americans about the sacrifices that have been made on our behalf—on behalf of beleaguered peoples elsewhere in the world—and on behalf of the liberty and freedom guaranteed by our Declaration of Independence and our Constitution.

This is hard to do in a social-media culture ruled by sound bites and “tweets.”  Stories rich in history and lofty ideals defy such cursory treatment.  But if we do our job well, good things will follow.  Future generations will understand that—politics aside—the act of pledging yourself to your country and being prepared to fight for the freedom of others remains a worthy endeavor.  They will volunteer to help veterans who are still with us.  They will comfort and assist the family that is grieving the loss of a service member.  They will visit those wounded in service to the nation and help them build new lives.  The spirit of self-sacrifice will live.

And our efforts on this Memorial Day will not have been wasted.

If I may, let me close by being parochial for a minute or two.  George Washington wrote:  “To be prepared for war is the most effectual means to promote peace.”  President Theodore Roosevelt, a great friend of the United States Navy, repeated these words in 1897 at the Naval War College.  The danger of being unprepared for war became obvious during the War of 1812, whose bicentennial the Navy and the nation are now observing.  Being ready is precisely why our College was established—to educate those who do business in great waters, in the skies overhead, and on faraway shores.

Our Navy is the most potent weapon of maritime battle ever forged. But it is also one of the world’s greatest instruments of peace and humanitarian assistance.  American seafarers serve on the ground in Afghanistan.  They defend our world’s oceans from piracy, working with friendly navies in places like the Indian Ocean.  They provide food, medicine, and comfort when natural disasters strike in places like the Philippines, Indonesia, or Japan.  This dual mission is why our latest recruiting poster shows an aircraft carrier conducting flight operations at night and tells us we can SLEEP TIGHT.  That’s what American naval power is about—deterring war, providing security so that nations may thrive, and comforting the afflicted in their hour of need.

General Patton can rest easy.  Men and women such as those he commemorated in 1945 still live.  I know; I work with them.  Not just our Navy but our Army, Air Force, and Marine Corps are in good hands.  It will remain so if we do our job—and make every day Memorial Day.

A few more photos from our trip to Mattapoisett 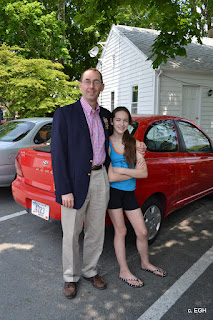 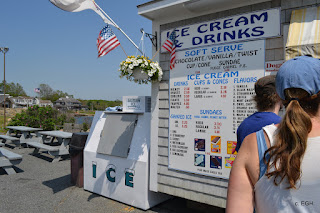 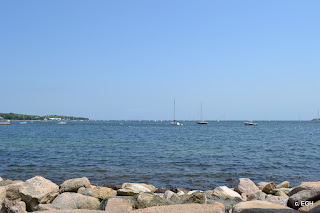 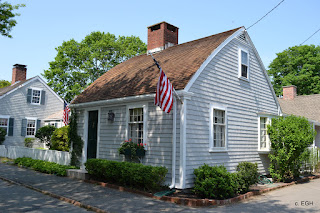 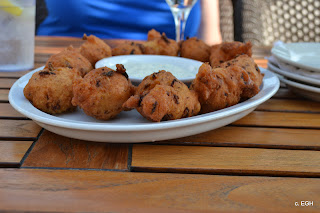 RIlurky said…
Congrats to Jim on being asked to speak at such an important occasion. His speech is moving. Thanks for sharing.
5/28/2012 8:34 PM