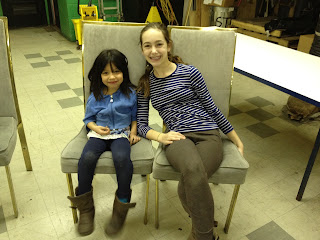 I wanted to share the sermon from yesterday's church service at St. Ann's. Emma and I were there with a small group from our church here in Rhode Island, St. John's. We've had an ongoing relationship with St. Ann's for over 10 years now and one of the things we do is sponsor kids to attend the Episcopal Conference Center Summer camps. Members of St. John's host kids and pick them up and take them to this camp in beautiful rural northwest Rhode Island. Emma has been a camper there too for the past 3 years and loves it. One of the campers who attended from St. Ann's is hoping to be a counselor there this coming Summer. I went down last April and wrote a blog post about it which you can read here. I had the chance to see a couple of the elementary school aged girls I hung out with on my last visit, and to make some new friends. One of the other great things was getting to know the others from St. John's better too -- nothing like sharing meals, and sleeping on the floor together for bonding. One of the absolute best things was watching Emma come totally out of her shell with both the St. Ann's people and our group. She really is terrific with kids. She loved her visit and didn't want to leave on Sunday after church when we headed home. For me these trips are a great reminder of what is really important in life and of how blessed I am. So without furthur ado, here's the sermon:

When Jesus spoke about angels ascending and descending, I don’t think that he foresaw that he might be talking about the stretch of Interstate 95 between Rhode Island and New York. But, you see, many of our young people, when they go to Rhode Island, come back thinking they have been to heaven.
Some of our boys—excuse me, young men—have told me that they are different people when they are in Rhode Island. When they are free of the stresses and the peer pressure of the South Bronx, they reveal the better angels of their nature. And that can change their whole lives.
One little girl was totally convinced that Rhode Island is heaven. One of the reasons that she was so sure was that when she went swimming in the waters there, the eczema that had plagued her, disappeared.
As a priest who particularly cares about children, I was delighted to have our children experience Rhode Island. But what I did not anticipate was that so many of them would then want to move there. And some of them actually did. Have you ever heard of runaway sheep?
Despite the fact that a haven is a refuge or a sanctuary, Mott Haven does not have a heavenly reputation. In fact, when the label “South Bronx” began to be used with all its unpleasant suggestions, this area is where they were referring to.
Nobody wanted to be responsible for conditions in the South Bronx, so the politicians liked to pretend that we didn’t exist. People were discouraged from coming here. The Gospel says “Can anything good come out of Nazareth,” but it might have said “Can anything good come out of the South Bronx?”
I actually had a supervisor in seminary who couldn’t understand why I wanted to come here. He thought I must want to buy drugs. It used to be that if you looked as though you didn’t belong here, they thought you were a teacher or a social worker. But these days, you could be a friend. Can anything good come out of the South Bronx; you bet it can.
Before Jonathan Kozol wrote Amazing Grace, people used to hide conditions in the South Bronx. The denial of reality was so extreme that on the abandoned buildings that people could see from the Bruckner Expressway, the city actually posted stickers of flowerpots in the windows so that commuters wouldn’t find them so depressing. But conditions will never get better unless the truth is known.
And so Amazing Grace was published and people learned that conditions are very challenging here, but they also learned that there are a lot of good people that come out of the South Bronx.
In the Gospel, when Nathaniel heard that Jesus was from Nazareth, he reacted “Can anything good come out of Nazareth?” Scholars have observed that the closest thing we have to Nazareth is the South Bronx. Primarily they say that because so many people live in poverty. Mott Haven is still the poorest part of the poorest congressional district in the whole country. Most people in our neighborhood live in what’s called extreme poverty, which means that their family income is less than one-half the poverty rate. That is what conditions were like in Nazareth, where Jesus grew up. Didanything good come out of Nazareth? Does anything good come out of the South Bronx?
There are more ways in which Mott Haven is like Nazareth. There is a strong sense of community among the people of this neighborhood, just as there was among the people of Nazareth. There is also a feeling of powerlessness, because what power we have is not often used.
But the way in which the South Bronx is most like Nazareth is the contrasting economic poverty and spiritualwealth. Because we live very close to the margins, most of us are extremely aware of how much we rely on God. As a result, there’s a church on just about every block in this neighborhood. So, how can anyone question whether anything good can come out of a place like this?
My feeling is that it is more than likely that a lot of good will come out of places like this. You know the old saying: What doesn’t kill you makes you stronger, and those that come out of Nazareth and Mott Haven are mighty strong.
But in addition to strength, growing up here gives many young people compassion—they really can feel other people’s pain.
It also gives them a closeness to God. Even gang members wear rosaries around their necks and if you listen to rap, you’ll hear a lot of God talk.
If you want immediate proof that something good can come out of place like this, all you had to do was to look around here yesterday and today. You would see the results of angels ascending and descending along Interstate 95. The people of our two communities come together recognizing somehow that without each other we are not whole, that without each other we are not what God wants us to be.
And so a lot of good continues to come out of the South Bronx— and out of Barrington. We have a relationship that was born in Amazing Grace and nurtured by God. Those whom God has joined together let no one put asunder. Bringing communities together to reconcile this world to God was also the work of Martin Luther King, the work that we celebrate tomorrow. May we continue that work. Amen.

Note:
Jonathan Kozol wrote Amazing Grace: The Lives of Children and the Conscience of a Nation in 1996.