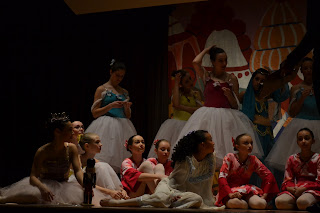 Yesterday was a big day around the Holmes Household. Emma had dress rehearsal for the Ballet Center's production of the Nutcracker for several hours in the morning, and we were allowed to watch and take photos which I did. I got some good ones. but I didn't want to use a flash and I really need a different lens for low light and movement to get better ones. Maybe I will get one with Christmas money -- though I want a telephoto one also. The photo above is from the end of dress rehearsal when the director, Miss Garance, was giving the older girls some notes. I love how Emma is looking right at her and so obviously is really into the experience. (I also love how the Nutcracker attended as well).

Even though I had watched dress rehearsal I saw so much more at the performance -- the camera really blocks my view of the show as an entire whole. I know I am probably bias, but Emma was fantastic. She really brought the part of the naughty big sister to life and really led the children in the party scene. Clara's character was more of a meek, quiet child. I found myself laughing (in a good way) at many of her facial expressions and gestures. She's really animated and vibrant on stage. The cast as a whole was great too and the production was the usual high quality Ballet Center fare. They did the show exclusively with Ballet Center students from age five on up through High School. The director tweaked the male roles to be female roles so the Nutcracker was the Nutcrackerette and Herr Droselmyer was Frau Droselmyer. The soldiers were majorettes and Emma's role is usually Clara's brother Fritz. The costumes were terrific as were the sets -- just a colorful, fun Christmas experience.

Several friends, both mine and Emma's, were able to come too and I had everyone over to our house first for some light refreshments. That made the event even more festive and I'm glad I stretched out of my comfort zone and entertained.

Emma is very tired today, but not too tired to go see her friend dance in another studio's performance of the Nutcracker this afternoon. She and her friend Katie M. went by themselves  after I dropped them off -- it was cool to watch them walk into the theater together all by themselves -- they are growing up.

Emma and I also went to see Festival Ballet's Nutcracker last weekend in Providence to see her friend Ally dance, so it's safe to say we are all Nutcrackered out for this season.

There are more photos in my Picasa web album at this link
https://picasaweb.google.com/egholmes/Nutcracker2011authuser=0&authkey=Gv1sRgCKO9s6jc38XdOg&feat=directlink 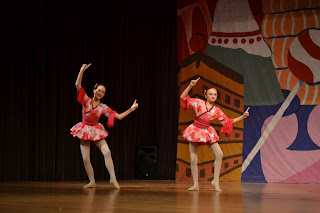