Rhode Island Music Educators Association (RIMEA) held their elementary school choral festival yesterday and today. This was the last in a series of 2 day festivals for High School, Middle School and Elementary. Emma is in the 5th grade chorus at Hampden Meadows and they performed this morning. I volunteered to be a chaperon because I really wanted to hear them perform and to hear some of the other choruses too. I was impressed by how good they were when I last heard them perform a couple of weeks ago. They put on a concert jointly with another elementary school chorus in Bristol. Both choruses sang and then they did a joint number, all the money donated went to Japan relief.

So, our day began at 7:30 when we arrived at school to gather and board two school buses for the trip to the University of Rhode Island where the festival was being held. By the time we loaded the buses and drove there and unloaded it was just past 9 am. This kids were all really pretty good -- but it was still loud on the bus. I sat with another Mom and chatted. Emma and her friend Katie H. were actually reading! We were the second group to arrive and got seated in the front several rows. It wasn't long until the first group got up to sing. I had enough time to take out my new DSLR camera and take some photos. The light was really low and I only have the built in flash so the photos are just okay -- but I wanted to capture the kids as they waited and hung out. Here are some of the best:
Hampden Meadows was the last chorus to sing in the morning group so we got to hear all the other choruses sing first. There were some who were really very very good and others that were okay. I was actually pretty impressed by the overall quality! Our kids went back to warm up so only the parent chaperons got to hear the chorus right before them, and then it was our turn. I took some photos as they were coming on the stage. I set the film speed to ISO800 and the shutter speed to 60 so I didn't need to use the flash. 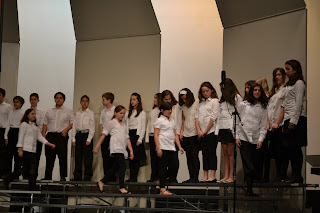 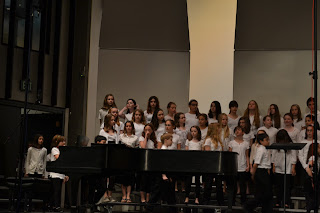 They did a terrific job with all three of their songs! Everybody except a couple of kids were watching Mrs. Degnan the whole time and everyone was concentrating and enjoying singing too. After they sang they did a short clinic/workshop with a college level choral director who showed them how to warm up their head voices and open up their mouths really wide to let the sound out. Emma's mouth is always open wide when she sings and she looks very intent and serious.

All the choruses then received a packet with a plaque with their rating and a DVD of their performance and the judges comments. Hampden Meadows received an EXCELLENT. The highest rating is SUPERIOR and there are a couple below EXCELLENT too.

What a cool experience for all the kids. We made it back to school by 1 pm and the kids had a late Pizza lunch. I went home to eat (something other than pizza) and to recover from my bus ride headache,
Email Post
Labels: 2011 Emma field trip