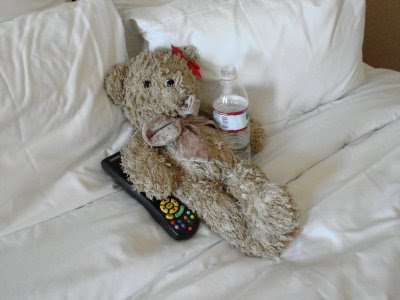 Teddy does New York in style 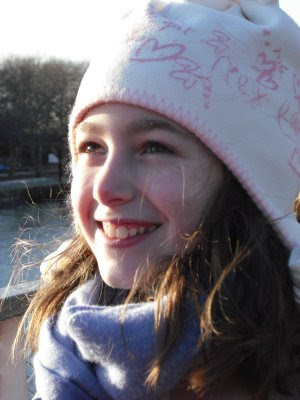 I started to write a blog entry on the train home which I will add below. This photo was taken on the Ferry to Ellis Island by the son of friends of ours that were on the trip with us. Hopefully I'll finish the story with another update soon, in the mean time here is part one.
**************************************************************************
Trip to New York City, February 15-18, 2009
Jim, Emma and I are on the train riding back to Rhode Island after spending a few days in New York City. Jim was on a panel presentation at the International Studies Association Conference there so we tagged along since it was Emma’s February Break from school. We left home on Sunday morning and took the train from Providence to NYC and then caught a cab to our hotel. We stayed at the Marriott at the Brooklyn Bridge across the bridge in Brooklyn – this was a conference overflow hotel – the main conference hotel was in Times Square. It was neat staying in a part of the city that I had never been to before and it was an easy subway ride to Times Square for Jim. We checked into the hotel and then headed out to visit the Tenement Museum on the Lower East Side of Manhattan. We had made reservations for the 3:00pm “Confino Family” tour and I’m glad we did because they were sold out for all the tours that day for those who had not reserved. It was a neat tour where we all pretended to be new immigrants recently arrived through Ellis Island and we were with our Settlement House worker looking for somewhere to live. While we waited for her to find the landlord of the tenement building we were the guests of 16 year old Victoria Confino in her family’s apartment and we were supposed to ask her lots of questions about what her life was like and how our new life would be. The actress playing Victoria was terrific and managed to draw out our rather quiet tour group. I was really stuck by how tiny the apartment was. The building we were in was 5 stories and had 4 identical apartments on each floor all of which were only 325 sq. ft. There were ten people living in the Confino Family apartment, which actually had 3 rooms in it. There was a window between the kitchen and the front room to let light in and another in the back bedroom to let light in since the only windows to the outside were the ones in the front room. All 4 apartments on the floor shared the two toilets off the hallway. There could be as many as 40 people living on each floor. Sitting in the space for over a half hour really gave us the sense of what it might have been like to live there. I know that our 1300 sq. ft. house seems very large to me now. As a historian I was very impressed with the research that they are doing at the museum and in how they are bringing back various eras and the actual families that lived in the apartments at different times. The Confino family apartment was set up as it would have been in 1916 and we saw photos of the actual family and samples of the newspaper in their native Ladino language – they were Sephardic Jews who had emigrated from the Ottoman Empire in what would be eastern Greece now. I could have just gone on tours of the different apartments all week, but we had other things we all wanted to see.

After that tour Jim and Emma headed back to the hotel and Emma took advantage of the indoor pool while Daddy worked on proofing his manuscript which was due the next day. Then they had Papa John’s Pizza delivered to the room and hung out. I had an hour before I was due to meet some “old” Lafayette College Sigma Kappa friends at a restaurant in NoHo for dinner. 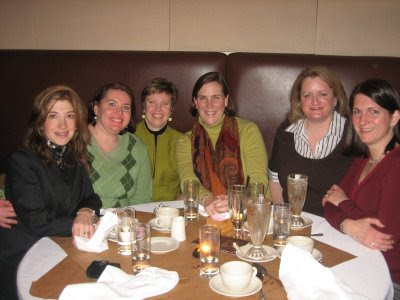 (Here we are posing for our waiter to take our photo: Karen, Alicia, Helle-May, Me, Marci, and Trish)

I walked the mile to the restaurant through Chinatown and soaking in the sights of fish and fresh vegetables for sale along the sidewalks. I also walked along the Bowery and then detoured into Soho and browsed around in a cool shoe store where I resisted buying a gorgeous pair of shoes I don’t need even though they were half price!. I got to the restaurant a bit early so I just sat at the bar and enjoyed a wonderful glass of Austrian white wine that’s hard to find – Grauer Verliner? I am pretty sure I was sitting next to a woman who either used to be a man or who was a man dressed as a woman. She was terribly chic and stylish, but had a rather low voice. Trish was the first of my college buddies to arrive and I recognized her instantly. Then Marci arrived , followed by Alicia, Helle-May and Karen. Everyone looked pretty much the same – only I think we all looked better than we did in the mid eighties. Karen had brought some photos and we remembered how bad the hairstyles and clothes were. We all took turnes sharing our stories since Lafaytte and just generally caught up, chatted, shared photos, etc… The food was delicious – I had mussels in a yummy sauce and ravioli stuffed with goat cheese and spinach. All of us were Sigma Kappa sisters, and we all lived in the house at the same time -- though we were not all in the same class. It was great for me to have a “Mommy’s Night Out” before the rest of our family touring trip.

Monday was another gorgeous weather day: sunny and windy, but with temperatures in the forties it wasn’t unbearably cold. We were headed to Battery Park to take the ferry to Liberty Island and then Ellis Island. We were early for our scheduled time so we took a walk up Broadway to Trinity Church Wall St. and looked at the graves of some famous people, peeked inside the church and also looked at the view down Wall St. The most interesting thing I saw there was a modern sculpture that looked like tree roots, but what was most interesting about it was that it stood in the same spot and was a memorial to the tree that was knocked over by debris on September 11. The branches of the tree shielded several very old tombstones from being destroyed. 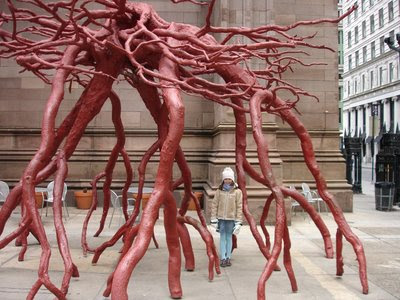 After we got back to Battery Park our timed ferry tickets let us jump to the head of the line for the “airport style” security check. It was Jim and Emma’s first time going to the Statue of Liberty and I couldn’t remember the time I was there as a very young girl. We had to go through another security check to go into the Statue itself and that included being puffed with air to check for explosive residue. I hadn’t seen that level of security before. Poor Emma had to be hand wanded each time because she was wearing overalls and the buckles were setting of the scanners. You can only go up to the top of the base now and not into the statue itself. But there are glass cut outs in the ceiling through which you can see up into the statue and get a feel for how large it is, the steel support structure and what the inside of the statue looks like including the waves of her gown. The view from the top was amazing and we had a glorious clear day to take photos of the Manhattan Skyline and of the statute from Liberty Island. We walked around outside the statue on various levels. Emma posed next to a statue of Emma Lazarus who wrote the famous poem which appears on the pedestal of the statute “bring us your tired and your poor….” .She liked the fact that they had the same name. Then after some lunch at the cafeteria, which was surprisingly delicious, we headed on to Ellis Island. We ran into our friends the Winners on the ferry. Jim and Drew were on the same panel together and they were also spending a few days in NYC as a family. Emma enjoyed hanging out with Charley and James. When we got to Ellis Island we all got our audio tours and went at our own paces through the typical path of a new arrival to Ellis Island. Jim and I spent almost a whole day at Ellis Island in 1994 not long after it opened so we let Emma lead the way. They do such a fabulous job of using oral history in that museum with recordings of actual people who went through Ellis Island talking about what the experience was like for them. Emma didn’t talk much so I’m not sure what she thought about the museum – maybe she will share more with me in the next few days. We were pretty exhausted after a full day and ferry rides out in the cold air, so we stayed close to the hotel for dinner and enjoyed some yummy Italian food in Brooklyn Heights right across from our hotel. I wish that we had had time on this trip to look around more in Brooklyn Heights which is the oldest part of Brooklyn right across the east river from Manhattan. I also wish we had had time to walk across the Brooklyn Bridge into Manhattan to get the views and also an up close look at the bridge, but we will have to do that next time.

Tuesday we all had an early start. Jim’s and Drew’s panel was at 8:00 so he left at 7:00 to leave plenty of time to get to Times Square on the Subway. 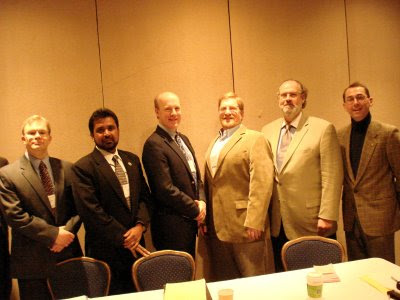 Emma and I followed not long after to meet Ann, James and Charley for breakfast at Ellen’s Stardust Diner where all the waiters and waitresses are aspiring Broadway stars and they take turns singing and entertaining the diners. The food was good too, but it was most fun watching Emma and the boys watch the singers and seeing how embarrassed they were when one of the entertainers/wait staff serenaded them! After breakfast we all headed off to the Metropolitan Museum of Art. It was a bit of a walk across town to get to the Lexington Line of the Subway and then a bit of a walk from the stop to the Museum, but we all managed to make it and saw a particularly neat door grill in the shape of a dragon so it was worth it.
Email Post
Labels: Emma Holmes Family NYC Travel