The Holidays are over 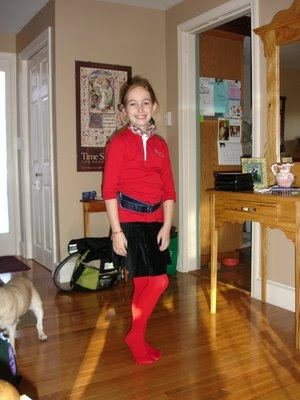 Here's Emma showing off the fancy outfit she picked out for her Winter Concert at school. It had to be cancelled on December 19th due to a big snow storm, but was rescheduled for yesterday. Emma was upset when it was postponed and very excited about it yesterday. Jim worked from home so he could go as well which was thrilling for her -- it's so gratifying when you can make her day so easily. She was performing in the Chimes club and also with the 3rd grade chorus. Her chimes group did a great job and we were particularly impressed with the way they recovered from a near fatal couple of bars where no one played. A lot of being a good muscian is recovering from mistakes. It was neat to see what the chimes looked like and to watch Emma concentrating and having a good time. The chorus performance was great too. All 100 3rd graders (5 classrooms full!) are in the chorus and they did a lovely Hannukah number in a neat bright key and then several up beat songs too. The director herself was particularly entertaining and reminded us of the UGA Gym Dogs coach Suzanne Yochlan. She confessed her love for muscial theatre which showed in the song selected many of which included choreography -- which was remarkable for the fact that it looked to me like EVERYONE was doing the moves and they were together. Pretty spectacular for 100 8 and 9 year olds. Emma's favorite song and mine was "You can't stop the beat" from Hairspray. She gave me a preview the night before. What was also remarkable was how confidently they all sang. Jim noticed a huge difference from last years 3rd grade chorus. Lots of parents were there -- including lots of Dads -- the parents are very involved and supportive in Barrington (could be one of the reasons the schools are so good).

In other news -- I had one of those moments a couple of days ago where time sort of freezes and you realize you are having a "moment". I was driving Emma and her friend Katie to ballet and we were listening to the High School Muscial 3 soundtrack. Emma and Katie were singing along and then I started singing along and acting goofy. They pretended to be embarrassed, but didn't ask me to stop -- so we drove along having a great time -- just singing and being. There was a bit more to it than that for me because I just loved that movie and it stuck some sort of poignant chord with me -- for me it's just so full of all the possibilities of being a teenager and reminds me of being that age -- the good parts and some of the bad -- these are less painful from this distance of age 45. The "love" between Troy and Gabriella just reminds me so much of my first loves.

Ok, I am sappy! Have a great weekend.