So Emma turned 8 years old this past Sunday -- October 7th. I can't believe she is this old already. Also, something about 8 just makes it seem like a milestone. The end of being a little girl and the beginning of being a big girl with all the contradictions involved in that. She's so grown up sometimes and still very much needs us at other times. For example she loves to dance and sing to the soundtrack of High School Musical 2 which we got her as a present -- but also still carries around, sleeps with and plays with her 3 stuffed WebKinz animals (two were birthday presents). For those of you in the know about WebKinz she has a black cat (the newest WebKinz released for Halloween), a black and white cat and of course a Pug Dog. If you have no idea what I am talking about just click on the link above.

We celebrated her birthday by having several friends over for a sleepover party. It went really well. They had Pizza and cake and opened presents and then played downstairs in our finished basement room -- they all got ready for bed without complaint and then watched High School Muscial (the first one which we have on DVD) while lying on their sleeping bags -- and we finally got them to sleep by 10:15 or so. In the morning I heard them around 6:15am, but they didn't come up until after 7 and then I made French toast with strawberries for everyone as their parents were coming to pick them up at 9. We just got the mess cleaned up in the basement room but it was fabulous to have this space for them to hang out and not worry about being in the way or being overheard. 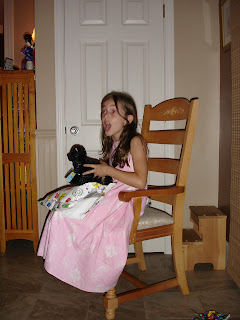 Here's Emma dressed up in her pink party dress -- exclaiming over the gift of the latest Webkinz she's just received as a gift. 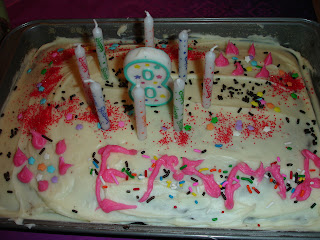 Here's the cake Emma and I made and she decorated! 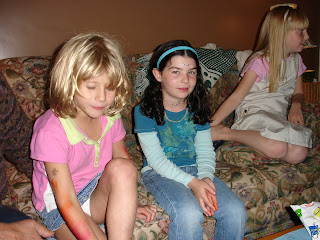 Olivia and Kayla -- both 1st graders that live on our street -- and Ally who is Emma's best friend in her 2nd grade class. They are watching Emma open presents. 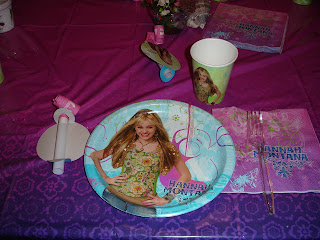 The party decorations were Hannah Montana themed. Yes, another Disney phenomenon. We played her music to of course. 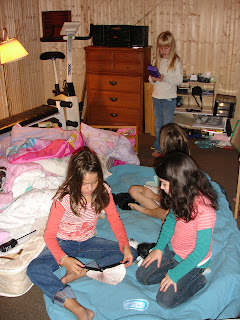 This gives you some idea what the basement room looked like in the morning. Here's our neighbor Diana who turns 9 soon and our down the street neighbor Kayla who turns 7 this weekend. Ally is in the background.
Email Post
Labels: barrington birthday Emma Friends