Our Man in Delhi 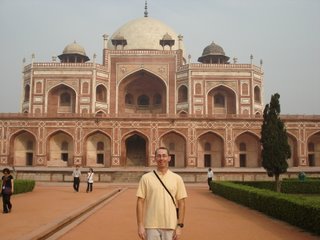 I'm the worst one to go off on a trip and return home with no photos of myself, so I prevailed on a couple of German tourists--Delhi is crawling with them--to photograph me here, before Humayun's Tomb. After spending an afternoon here, I no longer regret not having time for the Taj Mahal, as the Tomb predates the Taj by about a century and reputedly was the model for it. Other buildings at the site include lesser tombs and a mosque. A lot of India's finest buildings date from the Mughal period, when a Persian/Muslim dynasty ruled much of the country. The Taj Mahal and the Red Fort (previous post) date from the 17th century.

Fascinating country; probably the most "different" place I've been thus far, despite our common English language (which isn't very widespread among the Indian populace). It's been interesting to be here during our elections. The main concern for the Indians, of course, is whether the changeover in Congress will scuttle the U.S.-Indian nuclear deal. The Times of India, India's leading news outlet, seemed pleased about the Democrats' victory, although it also editorialized that President Bush "has been a great friend to this country."
[Posted by Jim from India]
Email Post
Labels: Delhi India jim Travel