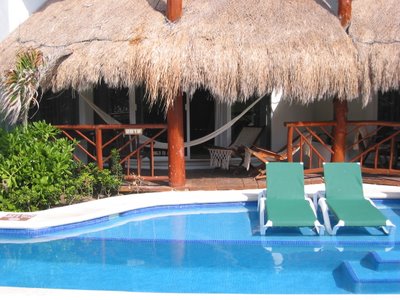 Isn't this a spectacular photo. It's a picture of my former classmate Andy Hogenson's room. He paid the big bucks for a fancy "swim up" Casita room. You can see his private lounge chairs in the photo. Also if you cross over the swim up lane on a little bridge you get to a large shaded area with tables which is by a small pool for this group of Casitas. His was a salt water pool which I liked so much better than chlorinated pools. It was great to float in it and to hang out by the swim up bar with half submerged bar stools and drink margaritas. A short walk from the pool and we could be at the beach or hanging out under Andy's private beach bed. This was a large mattress size cushion and headrest on a shaded raised platform. You could lie on it and feel that terrific ocean breeze and just look out to sea.

For those of you who don't know ... I got together on April 27-30 for 3 days and nights of R & R (at the El Dorado Royale a Spa Resort about a half hour south of Cancun on the Mayan Riviera) with 17 of my former classmates at the St. John's International School in Waterloo, Belgium. Yes, some of us also got together in San Francisco in October, but I just had to go again because more people were coming for this one including my best friend from 5-8th grade who is Danish and lives in Norway now with her Norwegian husband and son. I may have time to write more later -- but it was a great time and worth the stomach ache I had for several days after returning home to Georgia.
Email Post
Labels: Cancun Mexico Friends St Johns