News from Jim in Taiwan 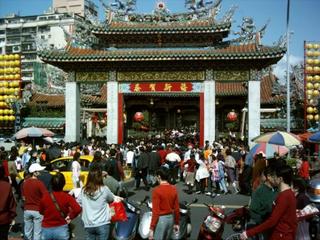 Fine weekend. Charles [one of the other fellows] and I spent most of Saturday at the
National Palace Museum, where all of China's art treasures
are on display (including the ones from the mainland, which,
ahem, found their way here from the Forbidden City here
along with the Nationalists). Really splendid.

On the way back, a few hours at the Shilin Night Market, a
quarter of town where merchants set up dumpy little shops,
carts with cheap Chinese food -- not sure there's any other
kind here -- and you jostle with zillions of other Taiwanese
to look at the merchandise. Much like the suq over in the
Middle East, except with beer and without prayer.

Yesterday, on my own, spent the afternoon at Longshan
Temple, the most amazing Buddhist shrine -- every inch of
the building is an artwork. Interesting difference here is
that the temples are actually in use -- incense sticks
everywhere -- whereas under the communists they're just
museums. Reportedly Taiwan is a very religious country, and
the Presbyterians seem to be the leading Christian
denomination.