A hot July weekend in Athens 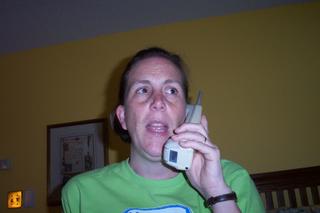 Emma and I survived our Mother /Daughter weekend. It was hot and sunny on Saturday so we headed to the outdoor pool at UGA. It's a huge pool and has two shallow ends with lap lands across the middle where it is deeper. There's a covered area with picnic tables and plenty of shade too. We ran into several of Emma's school friends so she had people to play pretend with and I had adult conversation so it was a success and we ended up staying for over four hours and probably getting too much sun.

Today we went to see the new Charlie and the Chocolate Factory movie starring Johnny Depp. Charlie was played by the same cute British boy who played opposite Depp in Finding Neverland and he was perfect. I went in expecting not to like it as much as the "original" Gene Wilder version entitled Willie Wonka and the Chocolate Factory, but instead I enjoyed it very much -- probably more than Emma did -- though it was just fine for kids -- nothing more weird or odd than the other version. It's really impossible to compare the two as they are just different -- like oranges and apples. I haven't read the book so can't tell which was more true to the book. I do know that I and most of the audience couldn't stop laughing when we were introduced to Violet Beauregard and her mother from Atlanta, Georgia (about 70 miles away) -- they were just such perfectly drawn charactures.

After we headed home Emma helped me fold laundry and load the washing machine and dryer. It's such fun to watch her get a kick out of ho humm household chores that are just a bother for me -- it makes it fun again for me too.

She also took some photos with her camera and I'm including one of me talking on the phone. It could be just that I'm her mother, but I do think she has a good eye.
Email Post